Meeting with a group of elders and tribal figures of Khenifir Khafajat .. Iraq will triumph in the challenge of building the state and provide services similar to victories in other challenges 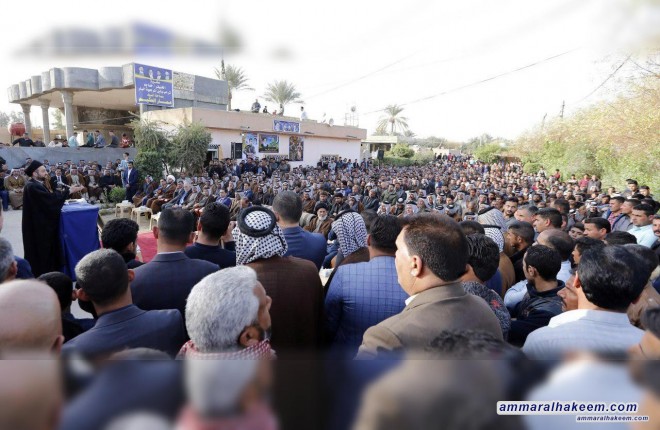 Head of the National Iraqi Alliance, Sayyid Ammar al-Hakim, expressed his confidence in Iraq's victory over the challenge of state-building and service provision similarly to Iraq's victory in the military challenge defeating terrorist Daesh , won the political challenge by consolidation of national unity, and the social challenge by eradicating sectarianism, and the fourth challenge will be the culmination of all challenges. His eminence pointed that the practice of elections and hold it on schedule is one of the most important factors to maintain victory.

His eminence met with a group of elders and tribal sheikhs Wednesday 24/1/2018, praised the role played by the Iraqi tribes during the pivotal stages in the history of Iraq, including fighting the former regime, responding to the religious authority call. The victory was achieved by the virtue of God Almighty and the religious authority fatwa and the tribes including Al-Khafajat tribe that mobilized young people and enlightened them of the danger posed by Daesh. His eminence called on everyone to assume their responsibilities to maintain these victories, urged the citizen to elect the best and most efficient team who has a plan, vision, tools and policies to provide services and build the state.

His eminence pointed out Iraq's international and regional status after the victory over Daesh, however elimination of Daesh on military level does not mean that Iraq is clear from Daesh, but rather Daesh is a deviant ideology that require social, political, economic and developmental solutions, noted that sectarianism is not and will not be societal sectarianism, it is a political sectarianism exploited by some sides for electoral gain, stressed the need to be aware of the national satus that emerged in the political arena and support it in order to achieve the government of the national majority and the national opposition.