Sayyid Ammar al-Hakim from Babil province: The success is in building a strong state preserves victories 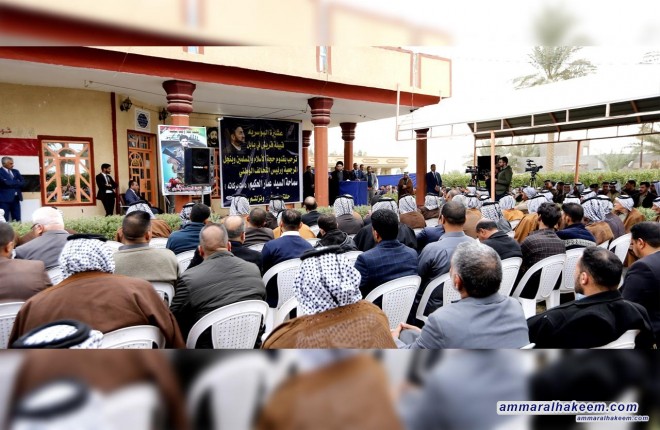 Head of the National Iraqi Alliance, Sayyid Ammar al-Hakim, in a speech during a meeting with a gathering of the Albu Sariyah tribe in Babil, Thursday 25/1/2018,
stressed that attaining preservation of the achieved victories, against Daesh terrorist groups and cordoning sectarianism, is in building a strong state capable of providing welfare to citizens, and that Iraq won the respect and appreciation of the world for the capability of Iraq’s sons to defeat Daesh occupation in a record time, Iraq had fought terrorism on behalf of the world and cordoned sectarianism. His eminence indicated “We have yet to reach the finish line, we have another challenge before us, the challenge of building a strong state capable of fighting corruption, cordon bureaucracy and achieving social well-being for citizens”, pointed out that the strong state builds a strong people with multiple religions, ethnicities, tribal affiliations and opens to the countries of the world and the region.
His eminence praised the service of the people of Babil province provided to the pilgrims, as Babil province is located on the road of pilgrims to Imam Hussein (peace be upon him), stressed that this service brought the blessings on the people of this province.