Sayyid Ammar al-Hakim: Iraq needs men of state, not contractors or gamblers or teenagers in politics 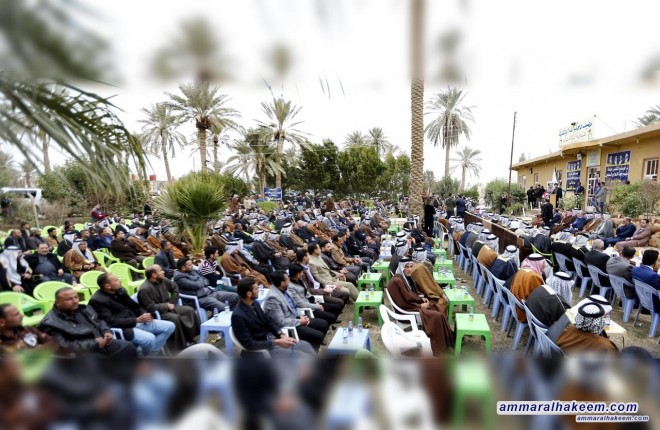 Head of the National Iraqi Alliance, Sayyid Ammar al-Hakim, met a big group of the al-Kadas al- Ibadah tribe north of Babil province Thursday 25/1/2018
Hs eminence stressed that “Iraq needs men of state who have the plan, the will and the competent team, Iraq does not need contractors who are eager to build their own projects in the four years’ tenure, or gamblers who bring the country in crisis, or teenagers who make the country a schoolyard to learn politics at the expense of the people's interests”. His eminence expressed his confidence that Iraq is moving forward but there is a difference between those who move fast and those who choose rough roads to reach, and here were the people manifest their ability in carrying out responsibilities.
His eminence emphasized that Iraq surprised the world of fast handling of challenges faced by Iraq, Iraq had swiftly cordoned sectarianism, and faced challenges of national unity and managed to eliminate Daesh in a unexpected period of time while the world had set for Daesh three decades to be eliminated, added "but the challenges did not end and the culmination of victories and preserving them, lies in the challenge of building the state and provide services to people”, pointed that it is possible to success in this challenge even if it seems difficult at first glance, but all challenges began difficult and then became a title for the victory of Iraqis, reiterated his belief that sectarianism in Iraq is political and not societal, and the diversity of tribes, including tribes of Babil province prevent sectarianism because it threatens tribal fabric and cohesion.