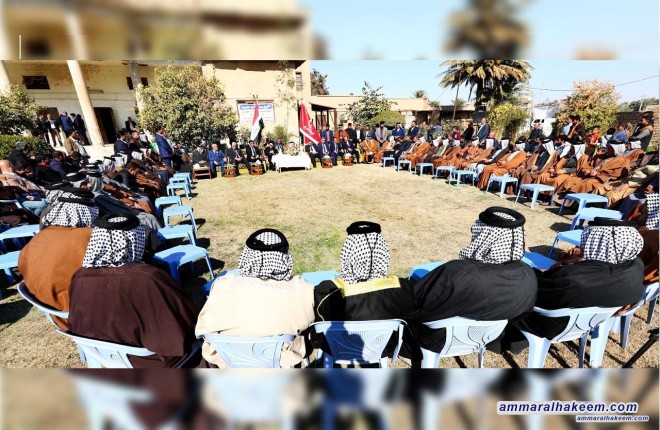 Head of the National Iraqi Alliance, Sayyid Ammar al-Hakim, met with a number of elders and tribal figures of the Al-Sarai tribe at the guest house of Sheikh Saad Hassan al-Khayun, chief of the Al-Saray tribe in the province of Wasit Wednesday 31/1/2018

His eminence indicated that finding strong relations with region and world countries that support the interest of Iraq contribute to solving internal issues and reconstruction of cities.
His eminence praised the sons of the tribes and thier remarkable stand to achieve the great victory on Daesh, after three years of hard work, indicated that achieved victory is credited for all Iraqis and all Iraqi people are part of this victory.
His eminence added that the military, political and societal victories, that the Iraqis are enjoying its glory, if occurred in any country other than Iraq they would fight for decades to reach victory, while the Iraqis concluded within three years, it is a great people and a blessed soil, pointed that it is not the finish line as a fourth challenge needs to be won, in order to complete the series of victories, the challenge of building the state, a strong state that stabilizes the country.
His eminence stressed that the victories achieved proved to the world that Iraq is unbreakable, a big and important country and should have relations with the countries of the world on the basis of the Iraqi interest, stressed the necessity of openness to region and world countries in which will provide substantial opportunities to resolve internal Iraqi issues.
His eminence stressed that the reconstruction of Iraq should be through investment and activation of relations, pointed out that this stage is sensitive, critical and decisive. This require that the people vote for who have the vision, the plan and the capable team of building the state, and that options are reviewed and verified so that the people contribute to elect who are able of building a strong economy and providing employment for the people.