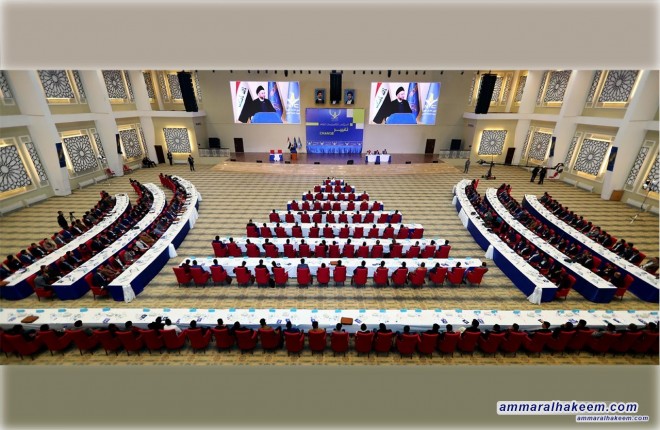 Head of the National Iraqi Alliance, Sayyid Ammar al-Hakim, at the Founding Conference on National Youth Council (Taghyeer), held in his office, Baghdad 3/2/2018, called on the political powers to compete on the basis of electoral programs and focus on pros away from projection, discredit and negative generalization, stressed that the Al-Hikma National Movement consider young people a primary national wealth for the country and represent a means to state-building, the Al-Hikma National Movement is open to all and to all believers in the political process, his eminence indicated that all believers in the political process is a partner, and the movement adhere to openness, adding "the rejuvenation will not affect standards, values ​​and principles"

His eminence urged the political powers and alliances, and all those who come down to the electoral camp, to make a treaty focusing on pros and what was and will be offered to the people, stressed on fair competition on the basis of programs, not on the basis of discredit and projections, emphasized the significance of investing the achieved military, political and societal victories that made Iraq the center of the world's admiration.
His eminence pointed out that the Al-Hikma National Movement believes in youth and is proud that it is a youth movement, considered that youth is the primary national wealth and not the oil.

His eminence added "We are a people of action, and our words are actions, we do not complain because complaining is the language of helplessness and negativity, but we are optimistic, not helpless, do not misjudge everyone, nor circling negativities , we positively view life, the country and reality, and look at the full half of the glass, we are positive and observe the achievements and strengths, including our strengths in resolving issues and mend weak points, indicated that there are those wagering on the failure of empower young people project, stressed the importance of young people success to show a success story in the community and to make a the Al-Hikma National project successful, plus conveying a message to the political powers that success requisite empowering young people.

His eminence promised to introduce a clear program to build the state, and commit to the program, as much as space given, stressed commitment to the national project, which was initiated by the Al-Hikma Naional Movement that became a known feature of the movement, pointed to the need to openness to all believers in the political process and their participation, urged young people to innovate in every aspect, but not in standards, values ​​and principles, indicated that the most devoted youth to the project are the most capable to perform duties, and is to be closest to a position of responsibility, his eminence added "Leadership is not a matter of office desk, but action, giving and initiatives that prove to all that young people are reliable to take responsibility in the leadership", emphasized that the youth have the right as their peers in the world to receive awareness, support and spread the spirit of optimism, invest in them in all levels identify projects that can lift and empower young people.