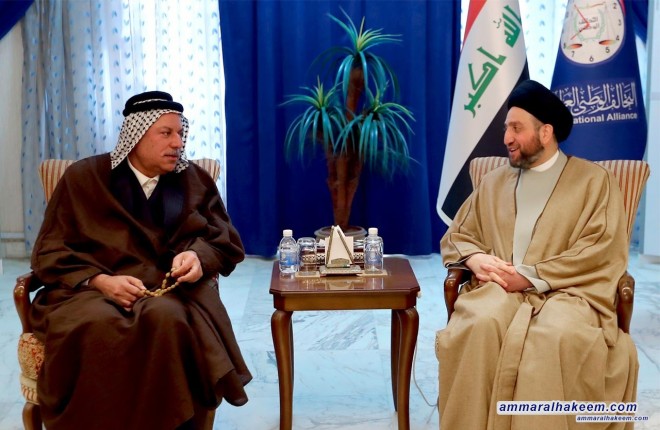 Head of the National Iraqi Alliance, Sayyid Ammar al-Hakim, in his office in Baghdad received Amir of Bani Hasan tribes in Iraq, Sheikh Muthanna Hatem al-Hasan and a number of princely elders and tribal figures Monday 5/2/2018
His eminence discussed the latest political situation, the post-Daesh phase and the challenges facing Iraq in the next phase, stressed the importance and necessity of winning the fourth challenge facing Iraq the challenge of building the state and institutions, urged everyone to shoulder their responsibilities towards this challenge, which must be the culmination of military, societal and political victories.
His eminence praised the roles played by the Iraqi tribes in confronting dictatorship and combating terrorism, supporting the democratic political system in Iraq, including the tribal principality of Bani Hasan that offered lines of martyrs in the fight against the regime and then against terrorism, stressed the need to preserve Iraqi tribes as it represent third pillar, after the religious authority and the Al-Hussein rituals that protected Iraq.