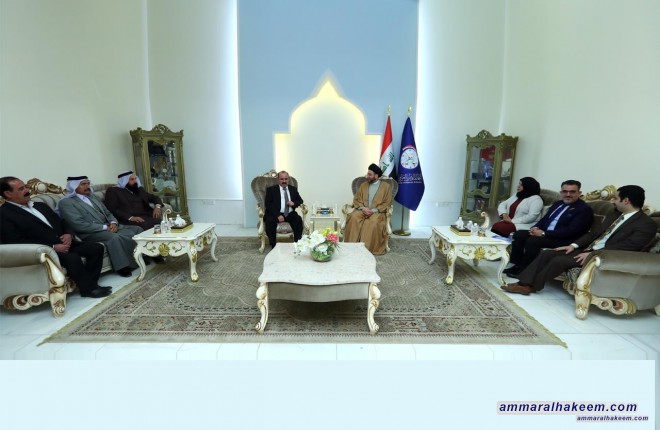 Head of the National Iraqi Alliance, Sayyid Ammar al-Hakim, in his office in Baghdad, received delegation of the Yazidi movement for reform along with elders and tribal figures of the Yazidi community in Sinjar Tuesday 6/2/2018
His eminence discussed situation of the city of Sinjar and restoration of normal life.
His eminence considered Yazidis an added quality and pride for the Iraqi community, called for granting compensation for this component, due to oppression, murder, displacement and captivity by Daesh, and considered everyone responsible for supporting compensations to them and to all categories and components that have been directly targeted by the terrorist Daesh groups. His eminence stressed the importance of reconstructing the cities in preparation to restore normal life and prevent the return of terrorism under any form.
The delegation of the Yazidi Movement for Reform praised the roles played by Sayyid Ammar al-Hakim in convergence of views and unifying parties, stressed the importance of rebuilding their cities, securing roads and resettlement of displaced people.