Sayyid Ammar Al-Hakim: The achievements depend on selecting an efficient team for the next phase 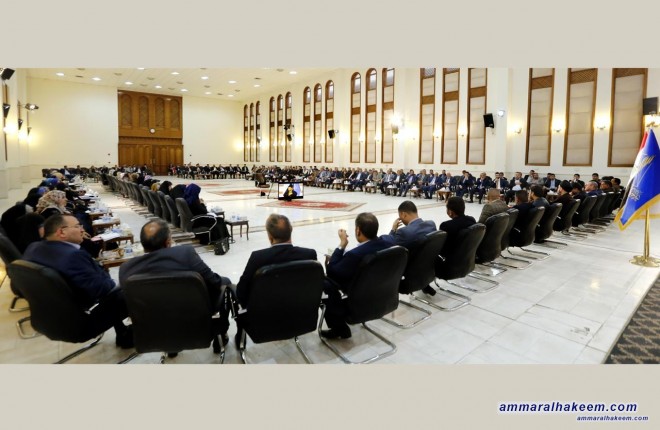 Head of the National Iraqi Alliance, Sayyid Ammar al-Hakim, in his Baghdad office met a group of leaders and competencies of south of Baghdad Sunday 4/2/2018
His eminence correlated accomplishing achievements and building the state with selecting a harmonious team that has a building vision for the upcoming phase, shouldered the public to making wise selection through the elections, added that the military, political and societal victories will be maintained and sustained in the event of success.
His eminence indicated: "The areas south of Baghdad lived a lot of adversities, crises and problems, starting with the security and military situation and direct targeting by terrorist groups," noted that the recovery of these areas was after a long battle with the terrorism in which the blood was offered, and the support for this battle was the blessed religious authority fatwa and the gallantry of tribes until Iraq was declared free of Daesh occupation.
His eminence emphasized that the war with Daesh is not over yet, stressed the need for more intelligence, security, cultural, intellectual and service efforts and to provide suitable opportunities and atmospheres for the Iraqi people to recover Iraq to its known long history of tolerance and coexistence among people.
His eminence stressed that the slogan today is to build a strong state capable of confronting terrorism, maintain the cohesion of the people and maintain the unity of the country, and added "If we can build the state, we would be able to add new achievements to the country," indicated that the next phase shows its seriousness, and if it was possible to find the harmonious team capable of building the state a new achievement will attained, however unwise selections will lead to longer and continuous periods of Iraqi people's suffering.
His eminence pointed out that the Al-Hikma National Movement emerged to meet the needs of the current phase, and elaborated that the Al-Hikma National Movement features in four points; youth, women empowerment, strive through a detailed program to build the state, and in addition to the patriotism.