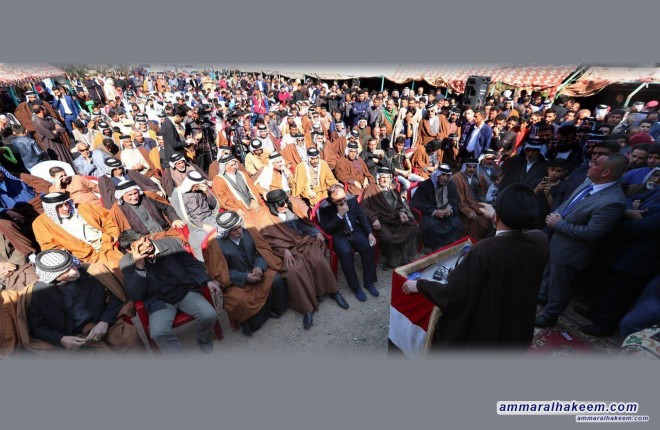 His eminence praised the roles and positions of the Al Juwaiber and the Husaynat tribes in combating the former regime, and responding the religious authority fatwa of sufficient jihad in the face of terrorism.
His eminence pointed out that the Iraqi tribes are one of the three cornerstones in preserving Iraq along with the Hussein rituals and religious authority of Najaf.
His eminence talked about the historical relationship between the tribes, including the Al Juwaiber tribe, recalled that they suffered murder, displacement and prosecution, but eventually were able to recover and restore their glory.
His eminence indicated that Iraq achieved three victories and is looking for the fourth victory the victory of state building and the provision of services. The three victories were, the military victories over Daesh, the political victory over calls for division and societal victory over sectarianism, stressed the importance of preserving the fourth victory to be the culmination of the three aforementioned victories, called to elect those who have vision, plan and the team as basis for building the state.
His eminence stressed the close relationship between Daesh and the Baath Party, pointed out that the Baath Party is Daesh in a different form, and that Daesh are a Baath of Saddam approach under a different cover. His eminence pointed out that building the state requires encouraging investment and investment requires safe security environment that is attained through a strong state of institutions.