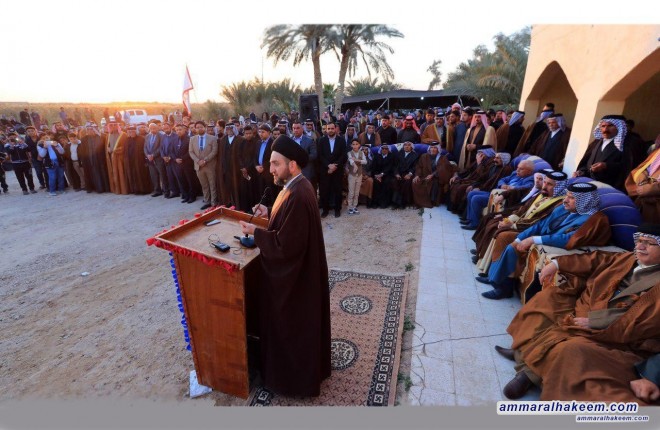 Head of the National Iraqi Alliance, Sayyid Ammar al-Hakim, in a visit to Dhi Qar province, met with Sheikh Haider Fahad Al-Sharash and a number of tribal figures at guest house of the Al-Badur tribe Wednesday 7/2/2018.
His eminence praised the Al-Badur tribe and the roles and carried out by the tribe during the turning points of Iraq history, including fighting the former regime and contributing to the support of the democratic system and to confront Daesh and the challenges.
His eminence pointed out that Iraq is very close to harvesting the fruits of Iraqi people patience and steadfastness supported with the wisdom of tribes and the mettle of youth, noted that Iraq will recover after the success in the challenge of building the state and institutionalization, indicated that this challenge faces all of Iraq and this victory is a task of all without exception, his eminence urged the Iraqi voter to select wisely and to take the opportunity provided in the ballot box and elect the best runners, the most efficient and visionary and project.

His eminence indicated that Iraq is admired by the world for its success the military challenge of Daesh, the challenge of division and the challenge of confronting sectarianism that were won in a considerably short time, praised the Iraqi tribes' response to the call of the blessed religious authority and perfected Iraq from threats. The Iraqi nation is glorious nation and will remain victorious, the people of Iraq won challenges no other nation in the world is able to face.