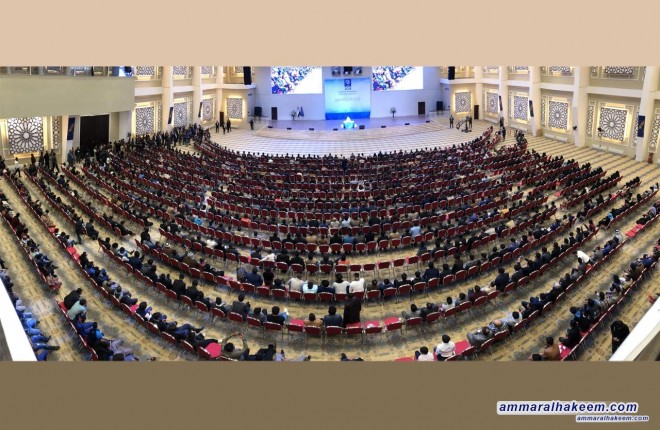 Head of the National Iraqi Alliance, Sayyid Ammar al-Hakim, in the Conference of Social Communication Foundation in his office in Baghdad Friday 10/2/2018, stressed the importance of adhering to the missionary media and the national discourse that unites the people of the country of various ethnicity and affiliations.

His eminence praised the efforts made by the members of the foundation and described it as a success story in the homeland, because it had made an important impact characterized by honesty and perseverance and made great efforts for the sake of the national project, emphasized that the role of media volunteers is very important and must be adhered to the missionary media, which includes several criteria and rules, that include principles as the movement's media is educational and not provocative and must have culturing, building, giving, and reminding values ​​and ideals and promote to the correct culture that has become lost in the political and social hustle.
His eminence pointed out that the missionary media is unifying in nature and seeks to unify the country and not to create differences and spread among love people and avoid the pessimism and negativity, and takes reality with a positive approach, and focuses on the common aspects among the Iraqi people, plus being authentic, verify information and convey the truth without exaggerations, his eminence emphasized that the missionary media does not fabricate lies.
His eminence stressed the importance of taking into account priorities and not to distract the discourse, and maintain calm and stability, and not to be dragged into conflicts, plus the importance of focusing on building the state and the empowerment of youth and women, noted that the Al-Hikma National Movement must include all sects and ethnicities to apply the slogan of patriotism.
His eminence called for a focus on professionalism and objectivity in presentations, events and influence of people, and to espouse clarity and courage in presenting the value, moral and morale status in the Social Communication Foundation, and the need to deal with everyone with calmness and resilience.