Sayyid Ammar al-Hakim: The national project needs political will that the political forces lack at the moment 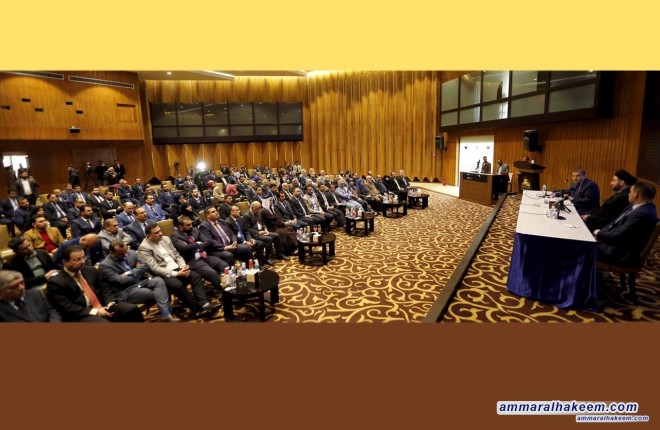 Head of the National Iraqi Alliance, Sayyid Ammar al-Hakim, in a seminar organized by the Office of National Relations in the the Al-Hikma National Movement Baghdad Monday 12/2/2018, indicated that the national project needs political will that is not present at the time, and that national mergers are influenced by political will, popular will and external will, stressed the need to develop the external will to support the national project, noted that the current phase requires unbiased political powers and electoral lists paving the way for forming pro-goverment and the national opposition, called for interacting on the basis of the putting the Iraqi interest in the first place in every aspect.
His eminence considered that the number of parties that exceeded 200 and coalitions that reached twenty-seven coalitions reflect a political chaos, indicated that there is a difference between pluralism and chaos, therefore merges are required to reach the bilateral status; a pro-goverment and opposition, pointed out that Iraq is at a turning point and the upcoming elections will pave the way for a political scene that may last until 2030. His eminence indicated that the Kuwait Conference reads a forward-looking statement of the international community showing that Iraq is recovering and stabilizing. His Eminence stressed the importance of winning the challenge of state-building, eradicating corruption and openness to the world.
His eminence expected the limits of electoral lists in the upcoming elections to be up to 40 seats, and indicated "If that is true, then we are looking to balanced lists." expressed his optimism about the multiplicity of lists in each area and based on multiple backgrounds. The political powers are divided into; unexperienced powers that enter the political arena for the first time with the willingness to learn, and political contractors working to seize the opportunity to achieve personal goals and adventurers, and speculators ignoring the consequences, and there are the professional class that represent the stakeholders and corner of the project, warned of political toppling, because it will create distrust among the people and public opinion, called for competition on the basis of programs and what was accomplished to the people.
His eminence stressed that the interest of Iraq is in abiding totally by the Constitution and the law, pointed to the current positive indicators, including the multiplicity of options and absence of entrenchment as well as the presence of patriotism among the political powers, and indicated that civilization means building the state and equal opportunities.
Regarding the Al-Hikma National Movement, his eminence reiterated that the movement's features are youth, women empowerment and realistic programs, indicated that the movement enabled young people to actually speak and practice in the General Conference and its departments and political bureau, as well as to give women a quota for representation in movement's departments. The General Conference was a reflection of the demographic reality of Iraq.