Sayyid Ammar al-Hakim: Regardless of its output, the Kuwait International Conference for Reconstruction of Iraq expresses the world's rush towards Iraq 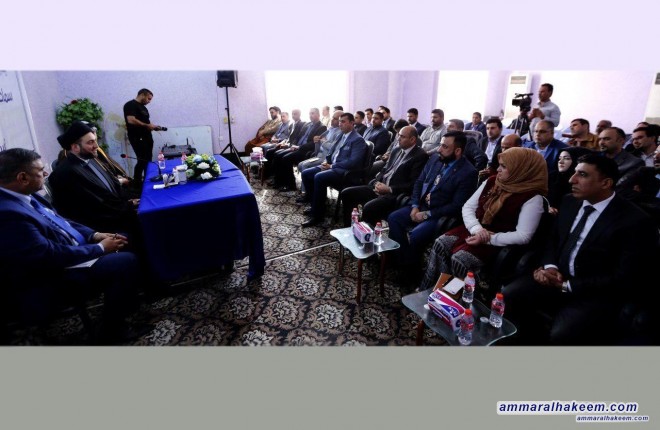 Head of the National Iraqi Alliance, Sayyid Ammar Al-Hakim, during his tour to the province of Maysan, met with elites and competencies of the province Wednesday 14/2/2018.

His eminence indicated that the Kuwait International Conference for Reconstruction of Iraq expresses the international community's rush towards Iraq, pointed out that willingness of more than seventy countries and hundreds of companies comes out of a positive reading of these countries towards Iraq, and result of the victories achieved in Iraq on the military, political and social levels.
His eminence pointed to the streak of victories achieved in the military, political and societal, the first victory on Daesh on the military level, and then the political victory over the division projects and the most important of all victories is the victory over sectarianism, expressed optimism that everyone is raising patriotism and national orientation, indicated that the Al-Hikma National Movement emerged from the core of challenges and worked on empowering young people that was remarkably successful, citing the General Conference where youth represented 70% ؜of conferees, and more than half in the Political Bureau, and empowering them in majority of leadership and media departments, plus women empowerment, the pateriotism and involvement of Iraqi components in the decision-making, indicated that the Al-Hikma National Movement have the project and the realistic program based on priorities of the next phase.