Sayyid Ammar al-Hakim: Iraq is before a great opportunity to build the state after the conclusion of war with Daesh 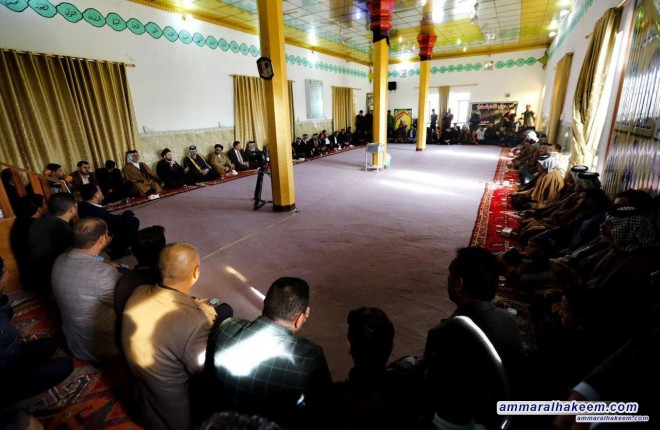 Head of the National Iraqi Alliance, Sayyid Ammar al-Hakim, in a speech at a meeting with the martyrs’ families of the al-Jammala tribes in the Maymona district of Maysan province Thursday 15/2/2018, called for unity, cohesion and stand together in order to preserve the achievements and proceed with the state-building after the great victory over Daesh terrorist groups.
His eminence indicated that the Iraqi tribes stood, sacrificed and offered martyrs combating dictatorship and in the construction of new Iraq, the tribes were present in all arenas and took roles and stood in support of the Constitution and elections, and to face of Daesh, plus the tribes’ honorable position in offering martyrs who joined the popular mobilization forces and the security departments. His eminence praised the sacrifices of martyrs that was a reason to achieve victory for Iraq, and added: " It was only achieved by the Fatwa of religious authority, the tribes’ gallantry and tribes’ sons rush to respond the religious authority call, otherwise this great achievement and victory over Daesh was not possible, our journey is long and our giving to this country is unbroken. We must put a join hands in order to build the homeland, especially today. We have a better chance than before, after the war on Daesh as a priority ended, the war that exhausted all efforts, and today and after liberation, Iraq has become able to move to the stage of construction and reconstruction and this shoulder us with great responsibilities, and we need to be present and a real stand to build the state.