Sayyid Ammar al-Hakim: Maysan province has great strengths and must be calm and stable 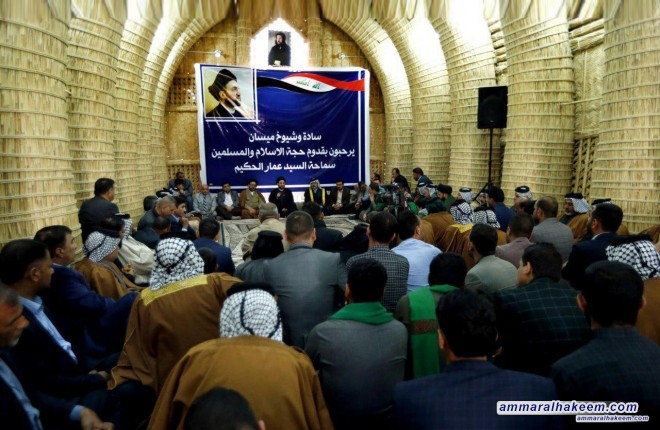 Head of the National Iraqi Alliance, Sayyid Ammar al-Hakim, in a speech during at a meeting with the religious figures and elders of Maysan tribes in the guest house of Sayyid Surout Thursday 15/2/2018, emphasized on the necessity to maintain the stability of Maysan province, which has a lot of strengths, urged to resolve tribal issues through dialogue and tolerance.
His eminence indicated that the Iraqi tribes stood, sacrificed and offered martyrs in the face of dictatorship and the construction of the new Iraq, the tribes were present in all arenas and roles, showed gallantry in support of the constitution and elections, and then in facing the terrorism of Daesh, and had an honorable stand offering martyrs in the lines of popular mobilization forces and security departments and added " achieving victory thanks to the religious authority, the blessed blood of martyrs, and the sacrifices of who sacrificed is not easy, it is difficult and great, and it is achieved by the honorable people of tribes and their courageous youth," pointed out that many people in the region and the world are not willing to offer sacrifice and redemption for the homeland and sanctities, while the Iraqi people are great and always ready to offer sacrifice, and this cohesion in society came as a result of cohesion with tribes, rituals and religious authority. His eminence pointed out that Iraq has won the war over Daesh and against sectarianism and achieved a social victory in consolidating unity, Iraq is facing the challenge state-building to maintain the national condition and the unity of Iraq, and to prevent the return of terrorist organizations, pointed that failure to build the state means losing all victories. The decision of state-building is critical which requires a vision, a program and clear plan, and a team with the energy and ability to implement the plans and vision set for building the state.
His Eminence considered the Kuwait Conference for Construction of Iraq an expression of international community's rush towards Iraq, pointed out that the willingness of more than seventy countries and hundreds of companies reflects a positive reading of these countries towards Iraq.
His eminence stressed the need to find a radical solution to water crisis and sustainability of irrigation based on mechanization, drip irrigation and modern irrigation methods, and pointed out that the province of Maysan has great strengths and must be calm and stable and overcome tribal differences through dialogue