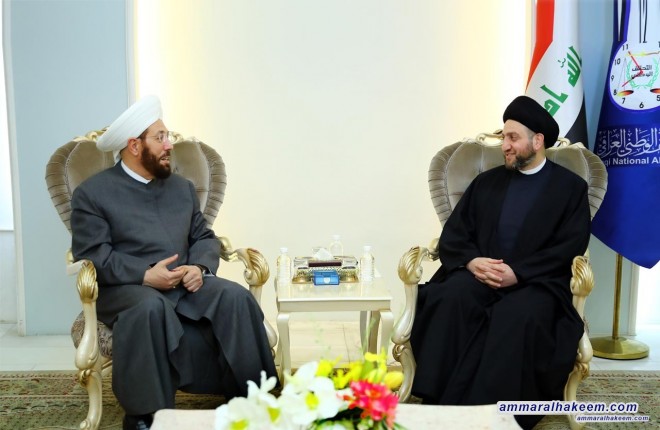 Head of the National Iraqi Alliance, Sayyid Ammar al-Hakim, in his office in Baghdad received the Grand Mufti of Syria Sheikh Ahmad Badreddin Hassoun accompanied by the Syrian ambassador in Baghdad, Sattam Jadaan Al-Dandah, Sunday 18/2/2018
His eminence discussed combating extremism and spreading peace, and development of bilateral relations and the importance of developing relations to serve the two brotherly peoples, stressed the importance of opposing discourse provoking extremism and hatred, and spreading the atmosphere of peace and coexistence, and called to take dialogue based approach and focus on national Islamic common aspects.
Regarding the reality of Iraq, his eminence stressed that Iraq is facing a fourth challenge the challenge of state-building, and Iraq must win this challenge, pointed out that success in the fourth challenge will maintain and a coronation of military victories over, and the political victories over division and societal victories over sectarianism, pointed out that the blood of Iraqis and their sacrifices were the fuel to victories.