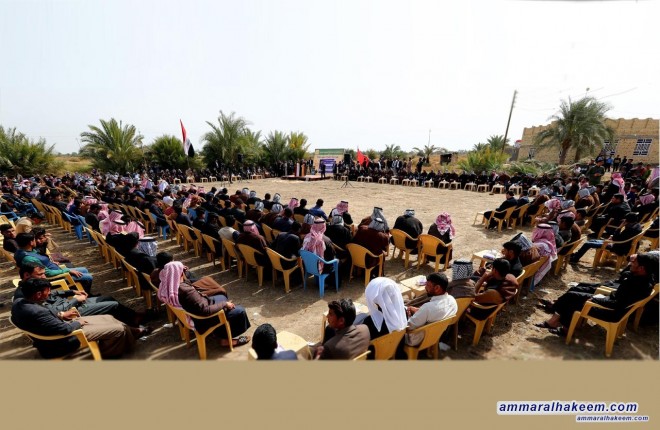 Head of the National Iraqi Alliance, Sayyid Ammar al-Hakim, during his tour in Muthanna province met elders and tribal figures of the Al Abs and then Albu Jayyash tribes Wednesday 21/2/2018
His eminence commended the sacrifices made by the two tribes in the face of past dictatorship and their response to the religious authority call in the face of terrorism.
His eminence pointed the importance of winning the fourth challenge facing Iraq, the challenge of building the state and institutions to make it the culmination of victories achieved on military level over Daesh, plus societal victory over sectarianism and victory over the challenges that faced national unity and consequences of division.
His eminence stressed that Iraq is capable to meet people aspirations if resources are well invested, noted that Iraq all plans and capacities are available, but needs to be organized. Winning the challenge of building the country needs a vision, a plan and policies, and pointed that the strength of Iraq had restored Iraq's position among the international community and changed the positions of other countries towards Iraq.