Sayyid Ammar al-Hakim: empowering young people is a solution to many of the problems facing Iraq and we call the Council of Representatives to list student scholarship in the budget 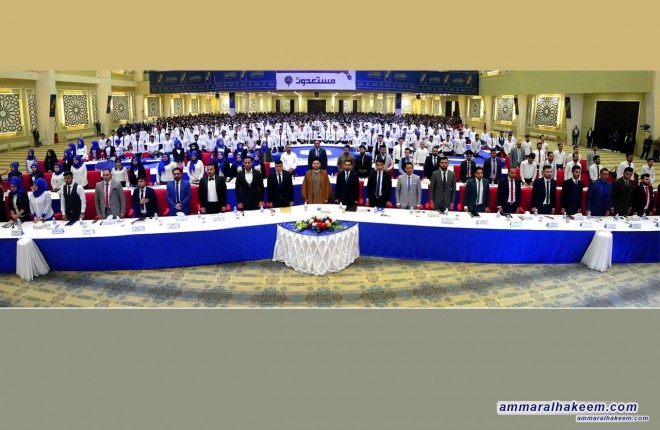 Head of the National Iraqi Alliance, Sayyid Ammar al-Hakim, in a speech at the General Assembly of Himam Students Gathering (mettle) in his office in Baghdad Saturday 24/2/2018, considered empowering young people a solution to many of problems facing Iraq, and called on the Council of Representatives to include scholarship in the budget for the current year, to assist the students in their academic life, pointed out to the importance of raising the level of service and education at laboratories and scientific expeditions, and the central admission, which sometimes make students imposed to study a major not desired or out of the students' area of creativity.
‎His eminence pointed that investment in human is the most important portal in construction, stressed to oblige companies and investors working or wishing to work inside Iraq, to use the experienced Iraqi youth in order to decrease unemployment, plus enabling the private sector to improve the economic status.
His eminence reiterated his perception for the forthcoming elections, that it will shift Iraq from instability to stability, and from establishing democracy to state-building.
His eminence pointed out that the Al-Hikma National Movement is characterized by moderation as optimum method to manage diversity in Iraq, also characterized by empowering young people, and women empowerment, considering that women are half of the Iraqi community and nurture the other half, and characterized by patriotism which is perceived sensationally not as a slogan, and characterized by having a clear vision and program to address the challenges and issues and to build a fair modern state. His eminence pointing out the features of university institution as it contains a big human mass of elite science seeking youth that has a major role in correction and change.
His eminence pointed to the priorities of the Al-Hikma National Movement, which includes commitment to standards, values ​​and principles and consolidation of national identity, without prejudice to privacy but interacting with it in a respectivemanner, called for prioritizing of the Iraqi interest when making decisions and actions, emphasized that the Al-Hikma project is a project of building a fair modern state that provides satisfaction to its children and provide employment, combat corruption, strengthen coexistence, improve the economy, facilitate investment and opens to the world basing on the interest of Iraq, pointed out to a priority the youth spirit, and moving from frustration. And making youth a behavior, thought and practice considering the importance of institutional action, and respect time at the personal level, at the level of the Gathering and at the movement level in Iraq, with emphasis on self-building as there is no limit for perfection.
His eminence stressed making brilliance and success as a priority that have no other alternative. Success is a key aspect at the self, movement and national level, and urged to have a vision and analysis ability that generate belief and then conviction and influence and leadership, stressed on the importance of teamwork and innovation without violating the standards, converting the plight to an opportunity, and openness to o all the Iraqi people without breaching the basic standards ​​and values.
Sayyid Ammar al-Hakim called on the invitees to serve people and to serve each other, adding "the Al-Hikma National Movement is the movement of service, and the more you serve the people the closer you become to me," emphasized on the importance of field and electronic communication.