Sayyid Ammar al-Hakim: The multiplicity of electoral lists in one scene and the talking of patriotism is a strategic development witnessed by Iraq 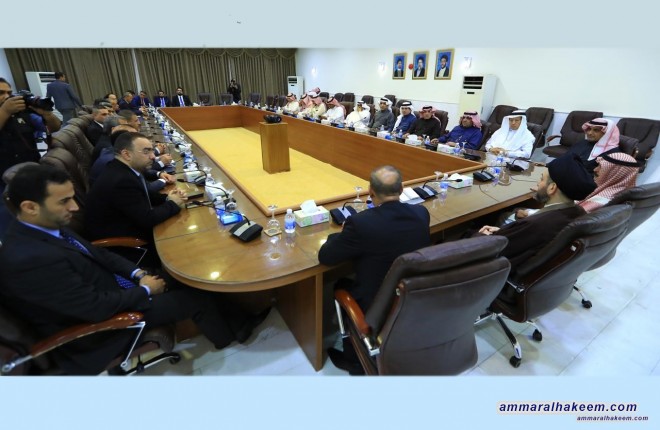 Head of the National Iraqi Alliance, Sayyid Ammar al-Hakim, in his office in Baghdad met with the Saudi media delegation visiting Baghdad Sunday 25/2/2018.
‎His eminence indicated that the multiplicity of electoral lists in the Iraqi scene, and talking of patriotism by all involved sides is a strategic development in Iraq, and that the Iraqi citizen has a high degree of political understanding, awareness and maturity.
‎His eminence confirmed that the democracy in Iraq in the developing and maturing citing that everyone does not have a clear perception of the outcome of the next electoral process, pointed out that it is pivotal elections and will shift Iraq from instability to stability and building the state, stressed that the outcome of the next electoral process if it led to sound outputs will put Iraq on the right track and cumulative of achievements.
‎Regarding patriotism, his eminence stated:" patriotism does not abolish privacy, but respects the privacy under the umbrella of Iraq's interest comes first, and this is a sound approach to build citizenship", and considered communities as sources of enrichment and cultural and civilization diversity. His eminence highlighted victories achieved by Iraq during the past a decade, indicated military victories over the occupation of Daesh, yet sleeper cells and extremist thought still exist as a challenge that needs broader solutions, and the second victory is the societal victory over sectarianism and conflicts and the last of victories was the victory of preserving national unity, and added " The fourth challenge is the challenge of building the state, institutions and services, which is the guarantor and keeper of all achieved victories ." and indicated that Iraq is prepared to succeed in the fourth challenge. There is a regional and international interest and desire for Iraq to regain its position.
Regarding regional status , his eminence stressed that Iraq is ready to play a communication role between rivals in the region by virtue of Iraq's status and position and common aspects with all, pointed out that Iraq is open to all and seeks to establish best relations with countries in the region and the world, especially neighboring countries, Iraq relations will not be with a certain axis, but Iraq's interest is in having balanced relations with everyone.
His eminence pointed out to the Iraqi experience that witnessed regional rush, repercussions and concerns, but Iraq, however, beared it's wounds and sustained terrorists bombings that killed people in the markets and schools for no reason at all, only because they are Iraqis, indicated that Iraq differs from what is captured or broadcasted in the media. The problems are part of the truth not all truth and problems are in every place, including what is raised about corruption
Regarding for the Al-Hikma National Movement, his eminence stated that the movement is born out of a womb of challenges and readings of the demographic facts and the percentage of young people in community, pointed out that the movement had empowered young people in important departments and empowered women through the quota, the movement is characterized of moderation, patriotism and presence of all Iraqi components.