Sayyid Ammar al-Hakim: Iraq at a historic moment to build the state 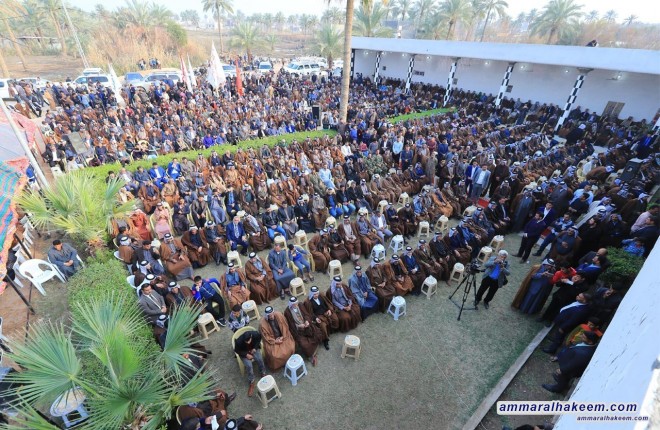 Head of the National Iraqi Alliance, Sayyid Ammar al-Hakim, in a speech at the guest house of al-Tharwan Bani Hasan tribe in Karbala province Wednesday 28/2/2018 emphasized that the world sees Iraq in a historic moment in building the state during the upcoming elections, indicated that victory in achieving this depends on the right choices.
His eminence indicated that the tribes have deep relation with the religious authority for decades, this relation is filled with work, cooperation and integration in the defense of the country and bear the public concerns of the people, pointed out that the Iraqis overcame many of tribulations supported by the fatwas of the religious authority, the honorable stand of the tribes and the performing rituals, these three pillars that kept Iraq, noting that these three pillars fortified the Iraqi people.
His eminence pointed out that the fatwa of the religious authority and the tribal bravery responding the call achieved a historic stand that shattered all claims that the battle against Daesh would be a long battle of attrition, but the people through the the sacrifices made by their sons were able to achieve the great victory within three years.
His eminence pointed out that Iraq also won over sectarianism, all people at all levels became patriotic active and this is a great victory, however there is a challenge, to build the state and achieving this victory means preserving previous victories, and added that the Iraqis have no choice but to win in building a strong state that will achieve well-being for the people, fight corruption and this must be achieved, despite the great difficulties it may face.
His eminence emphasized that the Iraqis are capable of accomplishing this victory through a vision to address the issues and find solutions to political, service and social problems, "and we believe that the ones able to build the state are the efficient youth, supported by societal and political powers.
His Eminence stressed that Iraq is at a historic moment to build the state,
" especially as we are on the threshold of electoral practice, and Iraq should make good choices in order to contribute to state-building