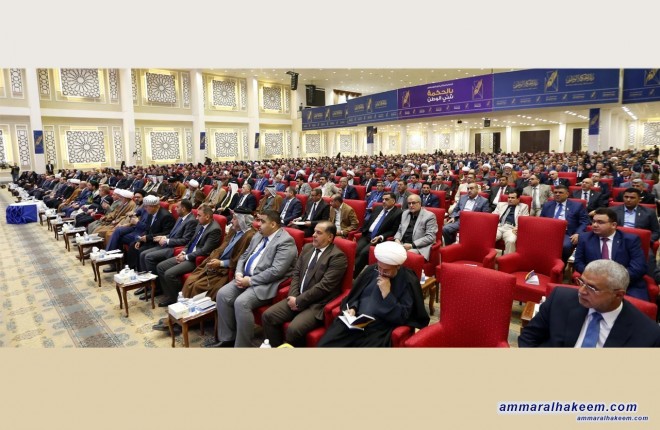 Head of the National Iraqi Alliance, Sayyid Ammar al-Hakim, during the special meeting of the General Conference of the Al-Hikma National Movement held at his office in Baghdad Saturday 3/3/2017, stressed adherence to the project of building the state and disregarding to discrediting and denigration campaigns, indicated that these campaigns against Al-Hikma movement in a number of occasions are evidence of the depth and credibility of the movement's project that intimidates the movement's opponents.
‎His eminence called on the conferees to communicate with the people and work on field level to support the project, "the closest to the project and the most involved are the most ones providing service to the citizen and the Iraqi street".
His eminence pointed to the successes achieved by the Al-Hikma National Movement at the nationally and internally, pointed adherence to the five principles of "moderation, patriotism, empowerment of youth, empowerment of women, clear vision and work program for running and building the state " which made it hard figure on the national, regional and international levels, stressed the importance of having impact and explain the project and vision and stay away negative circulation.