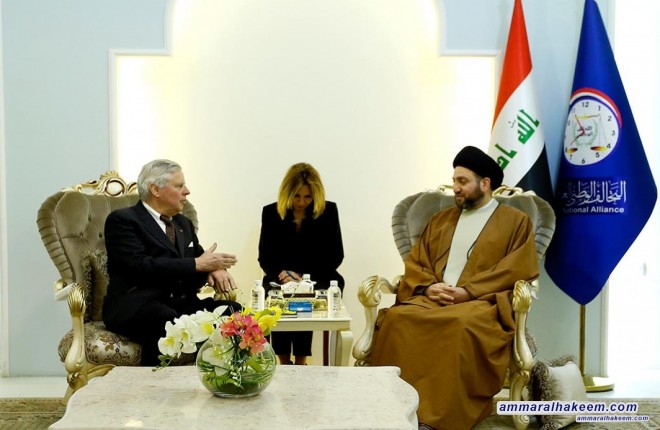 Sayyid Ammar al-Hakim in his office in Baghdad met with the Representative of the Secretary-General of the United Nations Jan Kubis Sunday 4/3/2018, his eminence stressed on the necessity to make the upcoming elections a genuine reflection of the people's will, called for providing proper conditions for the resettlement of displaced families to their areas and their participation in the elections.
His eminence indicated being pleased to how positive the international community look at Iraq, because of the sacrifices and efforts made that achieved victories, plus current policies based on openness in positive relations with the world, indicated that the upcoming elections will shift Iraq from instability to stability and building the country .
His eminence called for intensifying efforts to address the problems between Baghdad and Erbil, noted that dialogue is the only way to resolve the crises through the Constitution and the law.
He eminence pointed that the Al-Hikma National Movement is implementating the steps to the vision that has set for itself since its launch. After forming the Al-Hikma National Movement, national lists were formed in 16 governorates, pointed out that the lists were characterized by youth and new faces and expressed his aspirations for making electoral competition free of discrediting and tensed discourse.