Sayyid Ammar al-Hakim with Dr. Haider Abadi to discuss the next electoral scene and the positive view of the world towards Iraq 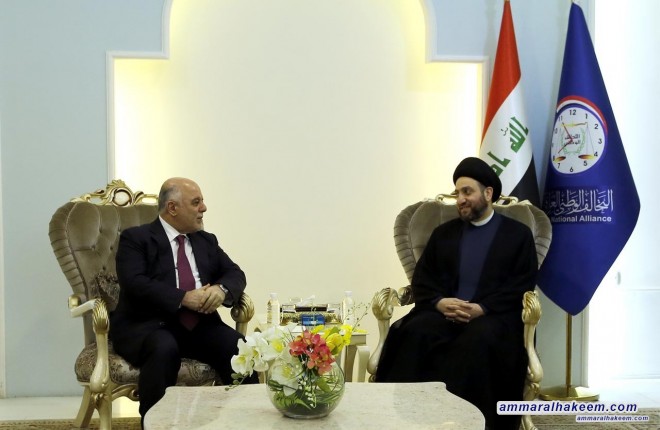 Head of the National Iraqi Alliance, Sayyid Ammar al-Hakim, in his office in Baghdad received the Prime Minister, Dr. Haider al-Abadi Sunday, 4/3/2018
‎His eminence with Abadi discussed the latest political situation, the electoral scene and the international turnout towards Iraq.
Both sides agreed and had matching visions regarding the elections, and the necessity to run for elections on the basis of programs and move away from discrediting and negative circulation,
Sayyid Ammar al-Hakim called on the government to complete all the measures, provide proper atmosphere for elections and resettle the displaced families, indicated that the upcoming elections are a turning point and will give the citizen the right to elect who he sees fit to run the country.
Regarding the relations between Baghdad and Erbil, Sayyid Ammar al-Hakim urged everyone to spread positive messages to resolve the unsettled problems, stressed that dialogue, waivering for the interest of Iraq and meeting half way are necessities to exit the crisis and guarantee the interest of everyone according to the law and the Constitution.
Both sides discussed the complementary relationship between the Iraqi Council of Representatives and the government, which contributed to resolve of a lot of issues, including the federal budget, stressed the importance of making a decision to the remaining acts and invest the remainder of the last legislative period.
His eminence expressed his delightfulness with the world's positive view at Iraq, pointed out that Iraq is the only country that lives in the obsession of building and its challenges of building, compared to many are obsessed with internal challenges and instability, pointed out that this positive view would not have been possible without the sacrifices and victories that have been achieved that are awaiting winning the state-building challenge to coronate and preserve the previous victories.