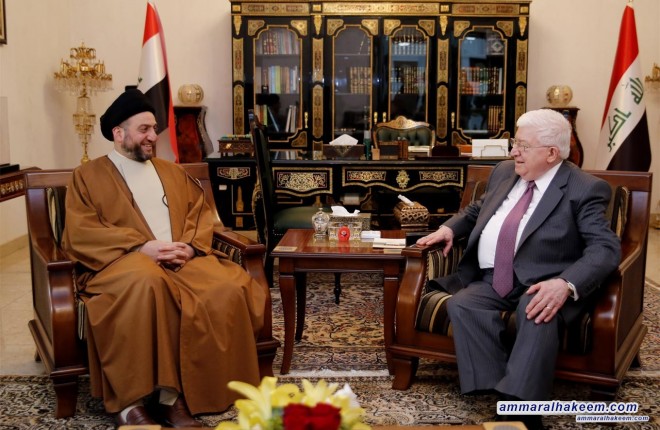 Head of the National Iraqi Alliance, Sayyid Ammar al-Hakim, met with President Fuad Masum at the latter's office in Baghdad Monday 5/3/2018.
Both sides discussed developments in the political scene in Iraq and the region and the upcoming elections. His eminence urged all to run for elections on the basis of programs and to avoid the methods of political discrediting, indicated that the upcoming elections will shift Iraq to the stage of stability and state building.
Sayyid Ammar al-Hakim expressed his pleasure about the nature of the lists in all the arenas, pointed out that this is in the interest of forming wings of the pro-goverment and the opposition, and regarding the state-building phase, his eminence stressed that this is the next challenge and a community need in the next phase, and it is necessary to create the conditions for victory in this challenge to coronate the achieved victories on political, social and military levels.
His eminence urged to spread positive messages to solve problems between Baghdad and the Kurdistan region, and facilitate opening of airports and salaries payment to the Kurdistan Regional Government staff, and emphasized that edherence to the constitution and laws guarantee the rights of everyone without exception.