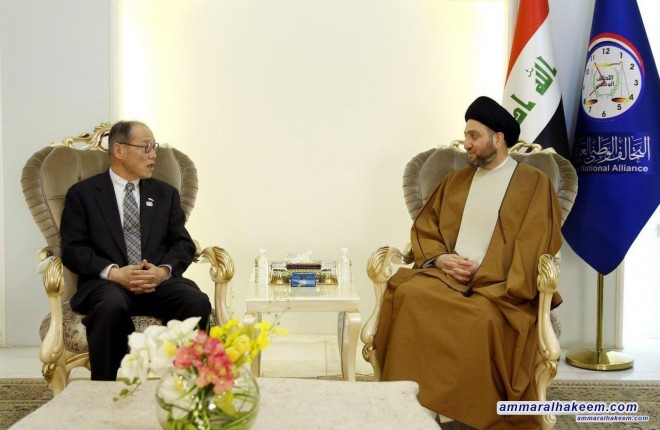 Head of the National Iraqi Alliance, Sayyid Ammar al-Hakim, received the Japanese ambassador to Iraq, Mr. Fumio Iwai Tuesday 6/3/2018
His eminence commended the level of bilateral relations between Iraq and Japan, called for strengthening relations on all levels and benefiting from the international experiences, including the leading Japanese experience.
His eminence pointed the international willingness and rush to support Iraq, considering that Iraq fought on behalf of the world and achieved a great victory against terrorism that is threatening all, indicated that the Kuwait Conference for the Reconstruction of Iraq was an actual translation of the international readings towards Iraq.
His eminence expressed his optimism about the future of Iraq, noted that Iraq is probably of the few countries concerned of building and stability, emphasized on the necessity of winning in state and institutions building, service provision to citizens and bolstering the Iraqi relations with its surrounding regional and international levels.
Regarding the upcoming elections, his eminence urged to run for elections on the basis of programs and in a stable and calm manner in order to achieve the desired results of the elections and produce a strong state capable of accomplishing goals, his eminence explained the wishes and aspirations of the Iraqi people for the next phase, shouldered all political powers the responsibility of meeting the ambitions and aspirations of the Iraqi citizen.