Sayyid Ammar al-Hakim: The government of partnership is no longer able to face challenges and not reliable in building a state 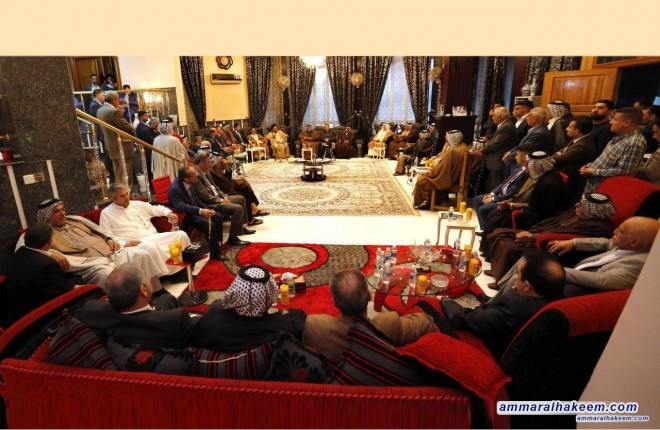 Head of the National Iraqi Alliance, Sayyid Ammar al-Hakim, met a gathering of dignitaries and competencies of Najaf Wednesday 7/3/2018
His eminence indicated that the government of national partnership, which is shared by all and opposed by all, is no longer able to face the challenges and not capable of building the state, however the government of national partnership was necessary for a particular phase that had passed.
His Eminence explained that the gap between the society and the political discourse is because of the age range, the majority of the Iraqi people are youth and the majority of the political class are seniors, noted that dependence on youth will only be after training and rehabilitation. This is what the Al-Hikma National Movement is working on, without disregarding or ignoring the people of experience.
His eminence pointed out that Iraq needs men of state, not unexperienced or contractor politicians, stressed the importance of having the plan, vision and workteam to accomplish achievements, plus the importance of avoiding discrediting and negative circulation, because it will not be in the interest of anyone.