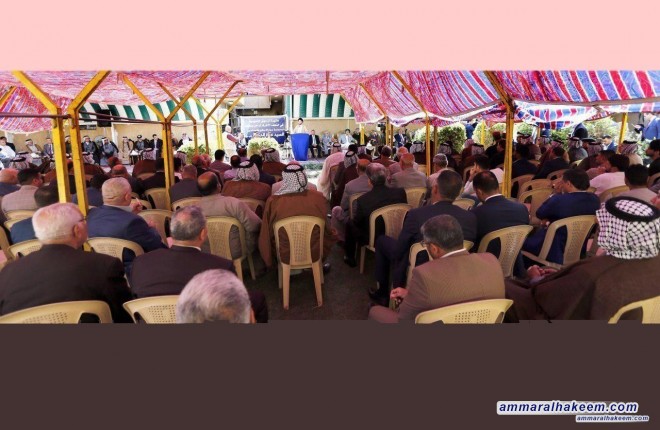 Head of the National Iraqi Alliance, Sayyid Ammar al-Hakim,during his visit to Najaf province, met with chieftain of the Al Fatla tribes Sheikh Abdul Aziz al-Sukkar, Sheikh Farid Al Ibrahim, the Albu Duhaidih tribes of Kufa district, and the tribes of Aldosh of al-Tamim tribes Thursday 8/3/2018
‎His eminence praised the roles played by the tribes of Al Fatla and the tribes Al Ibrahim in combating the former regime and confronting terrorism, noted that Iraq's project was protected and by religious authority, the Iraqi tribes and the Hussein rituals during all the challenges faced.
‎His eminence indicated that Iraq needs statemen capable of resolving the issues and not just showing and complaining about the issues, and the management of the state needs a vision, plan and an efficient team capable of meeting people's aspirations, orientations and services whis is the most important issue in the current time.
His eminence stressed that the state-building project is a challenge that must be won to crown political, military and societal victories, pointed out that this challenge seems difficult at the current time, but possible with combined efforts and accountability of each party.