Sayyid Ammar al-Hakim: Kirkuk has a Kirkuk identity and calls for the resettlement of displaced families of all components 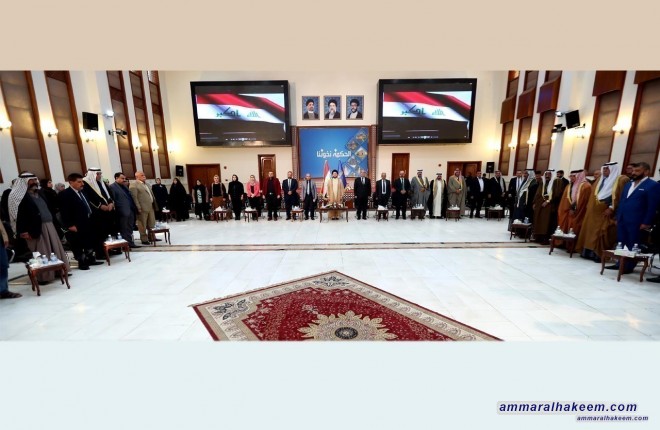 Head of the National Iraqi Alliance, Sayyid Ammar al-Hakim, in his office in Baghdad, met with a group of personages and competencies of Kirkuk of all components Saturday 10/3/2018.
His eminence indicated that Kirkuk is known for its people and has a Kirkuk identity, called for the resettlement of displaced people of all components, and expressed satisfaction and pleasure towards the people of Kirkuk input and adherence to their city and peaceful coexistence among them.
His eminence stressed that the interests of all are kept by avoiding aggression and expansion, and the importance of balance and patience and having tolerance in order to progress in Kirkuk and in Iraq as Kirkuk is a miniature Iraq. His eminence called for wise selection of candidates and invest the election opportunity to give trust to those who are the best and able to achieve the aspirations through having a vision, a program and professional and efficient team .
His eminence pointed out the victories achieved during the previous phase on political, military and societal levels against the challenges of national unity, Daesh and sectarianism, pointed out that the fourth challenge is the challenge of building the state and it is necessary to win it, although it seems difficult, but it is not impossible and there is no choice but to win it.