Sayyid Ammar al-Hakim: We will not be with alliances that are formed at the expense of interests of the people and we want an independent, stable, prosperous, honest, fair, moderate and open Iraq. 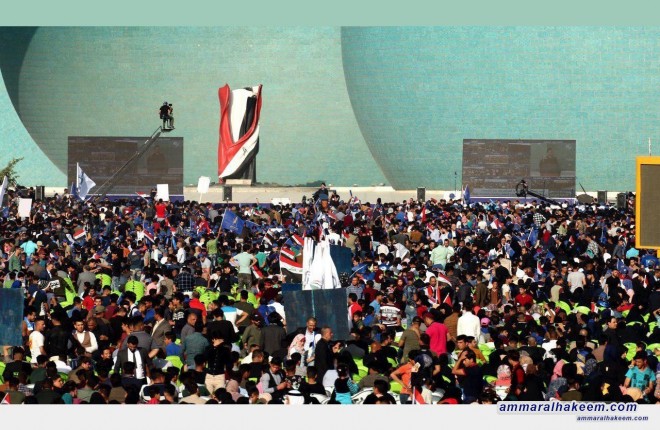 Head of the Al-Hikma National Movement, Sayyid Ammar al-Hakim, in a mass celebration in 17 provinces marking the day of the Iraqi martyr and commemorative of Grand Ayatollah Mohammed Baqir al-Hakim (sanctify his soul) Friday, 16/3/2018 stressed that Iraqis need an independent, stable, fair, moderate, prosperous and open Iraq and per Iraq’s interests and aspirations, stressed that the movement will not be involved with any political alliances formed at the expense of the people's concerns and national gains, adding "It is time for accountability, not favoritism and courtesy, it is that time that devoted professionals take their assumed real role,"
His eminence stressed that Al-Hikma National Movement will not be dragged into an arena of political and electoral dichotomy, and will be concerned with evaluating its experience and presenting its programs, expressed his refusal to support any candidate regardless of his level and political history in the Al-Hikma National Movement, everyone have equal rights and duties, stressed on dealing more firmly with those who took the opportunity in the previous elections and did not achieve the aspirations of the Iraqi people, called for scrutiny to candidates and elect the most appropriate and capable to bear people’s concerns and defend the rights " well you did, making 90% of the lists comprised of new and young faces, you youth” called for commemoration of martyrs and martyrdom and name alleys and streets after martyrs.

Youth will have a pivotal role in the next government

His eminence addressed youth by saying: "You are the hope and the future. You are our true asset and our national wealth. We trust you and we count on you. We are working to develop your abilities and empower you in politics, society and government. We are proud of you and by you we are winning." refused to ignore youth in the upcoming phase. indicated that the “Youth” will have a pivotal role in the upcoming government and in the process of state-building, addressed those who are bidding on discouraging young people and targeting their project. "The youth of this country have made epics and miracles during severe crises and difficult trials, and every time they offered renovation." pointed out that the years 2006_2014 had it pros and cons as well as the years 2014, 2018, “let 2018 and beyond be the years of youth”, considered the presence of millions in 17 provinces a proof that "you have concluded the battle of elections in advance (oh youth, we have made it through all, and today is your day).
His eminence refused to brand youth of frustration and pessimism, and talked to martyrs "You are the salt of this earth, you are the true volcano that will change the political equation that is not fair to men of building and loyalty to this homeland, with your ambition, make a revolution of real change on the 12th of May, make yourselves a real model for the youth of the region, and youth in the Arab world, "called on them to prove to everyone that they are the right men for the phase and change towards building the state and restore the prestige of Iraq, urged by saying," Do not allow despair to lead you, unit and communicate among each other to elect the best and the most honest and capable of achieving your legitimate dreams in our beloved country, the country of wealth and big opportunities.

His eminence added that Iraqis need an independent, stable, prosperous, fair, just, moderate and open Iraq, and will not allow Iraq to be the focus of regional rivalries. Iraq is and will remain a pivotal country having a pivotal role. Iraq is more capable and suitable to lead its interests and take care of its partners, called on everyone to recognize and admit this fact, indicated that politics based on conflict and dividing brothers is not good, Iraq will not be built with demoralizing and breaking of others, pointed out that everyone makes mistakes each one depends on its size, impact and presence, "We all should correct things and settle, we are out of time, and our people’s patience is becoming thin. "
The security situation still fragile and our fight with terrorism is relentless
His eminence stressed that Iraqis needs a stable Iraq, warned of fragility of the security situation and Daesh sleeper-cells, stressed that “our battle against terrorism must continue unabated”, called to make Iraq a big workshop for building, reconstruction, services and readiness to build liberated cities, cities of liberators, cities of victims and cities of sacrifice, emphasized to resettle displaced people to their cities in Nineveh, Anbar, Salah al-Din, Tuzkhurmato, Jorf al-Nasr, Suleiman Beik, Aziz Balad, Diyala and everywhere. His eminence stressed the Iraqis need an uncorrupted Iraq, called for the onslaught of those who are capable and trustworthy in order to eradicate corruption, “it is not possible to eradicate a long-rooted layer using slogans that do not go beyond media campaigns”, pointed out that fighting corruption is made by eliminating its causes and not by slogans, politicization, discrimination (between the strong and the weak), or by bidding, agitations, demonstrations or by emotions, randomness and improvisation, but by a well-designed plan.
His eminence emphasized justice and moderation. There is no distinction between a citizen and another, regardless of ethnicity, sect or religion, rejected extremism, and working to consolidate co-existence and civil peace among Iraq’s components and sons, and added "Yes to the Sunni Shiite brotherhood, yes to the Arab Kurdish Turkmen Shabak Failey brotherhood, yes to the Islamic Christian Sabean Yezidi brotherhood, yes to every patriotic honest Iraqi who favor the interests of Iraq and its people above all, yes to the national settlement among Iraqis", emphasized the openness of Iraq to its neighbors and international community, indicated that openness to the Arab brothers is not betrayal and openness to the Iranian and Turks brothers is not a shame and openness to international community friends is not despicable, indicated that patriotism calls to build the best relations with everyone, expressed welcoming all initiatives from brotherly and friendly countries willing to be open to Iraq and redraw relations based on common interests and current challenges, added “who offers a step of openness to Iraq, will see from Iraq dozens of steps to structure, deepen and develop relations”.

There is no room for failure in the next phase

His eminence clarified that “the prosperous, stable, independent, fair, moderate, uncorrupted and open Iraq, is the Iraq that we aspire to and we are working on building with youth’s strength, youth’s mettle and youth's enthusiasm”, stressed that “we will not let allow failure in the next phase”, indicated to work on building a state of citizenship through a real national majority that gather patriotic devoted Iraqi powers of all spectrums of Iraqi people, and open the way to a national political opposition to monitor performance and expose mistakes, a state worthy of the sacrifices of Iraqis and their history, wealth and potentials, a country in which it revives economy (agriculture, industry, trade and investment), in which it develops education, provides appropriate health services, eliminates red tape and bureaucracy, adopts institutions, respects the law, and respected by citizens, pointed out that this is the project of "Al-Hikma" and he is ready to sacrifice all for it, and will remain the safety valve in this nation, and gatherer of its ambitions, and the merger of its intersections, and bridge connecting between the different powers, described responsibility as great, Al-Hikma are the project’s owners that all the nation observe, called on the children of the Al-Hikma to be worthy of the responsibility and the size of the project, and addressed them "Be men of actions, not men of words, prove yourselves to be true statesmen, and that youth are capable of miracles not only achievements.”

Shahid Al-Mihrab was relying on Allah, optimist and open to the nation

His eminence revealed features in the character of Sayyid Muhammad Baqir al-Hakim, indicated that he was open to the nation, relying on God, confident of his victory, he was optimistic, hopeful, positive and enthusiastic in the harshest circumstances, and added "He read history and studied the biography of whom past away. He has written an important book in the Quranic Tales and in defense of the Iraqi people, and his positions and courage. He believed that the divine ways are renewed at all times, and those who do not learn a lesson from history, history will make an example of him, and indicated “We truly need this positive and optimistic vision in our time and in our youth and in building our national experience," pointed out that the late Sayyid Muhammad Baqir al-Hakim specially focused on three levels in dealing with the nation (tribes, youth, women) and was talking about the three pillars that have maintained the value identity Iraqi people (religious authority, tribes, rituals) and believed in the need to empower youth and women in social and political work and other areas, his eminence indicated that Al-Hikma movement is relying on youth and women and empowering them, and this expresses the movement’s commitment to the approach of the shahid al-mihrab (sanctify his soul). The shahid al-mihrab character was open to all segments of the society, supported the national project and mobilizing all energies to overthrow the dictator, when he returned to the country he had a national uniting discourse, and added "shahid al-mihrab never succumbed to the pressure of a phase and harsh conditions, but he always saw challenges as a motive to give more and move towards achieving the goal, and every time he found the men suitable for the phase who had the willingness and determination like you beloved ones“, stressed that he did not discriminate and was a father for all. The men of Al-Hikma are the campaigners of the project for which shahid al-mihrab had sacrificed, addressed the children of the Al-Hikma Movement: "Do not hesitate in serving your people and be effected by demotivation, do your thing and be proud”.