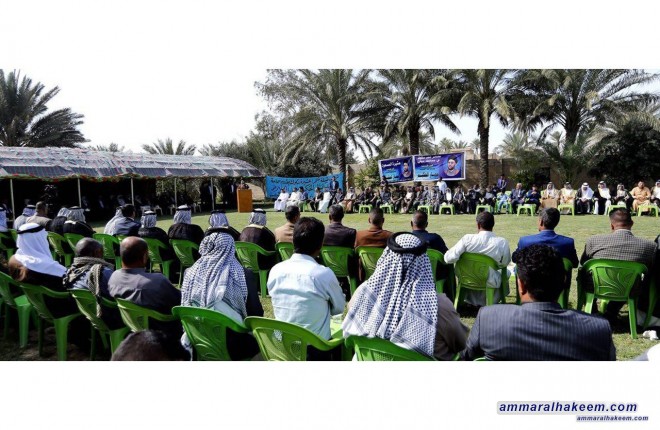 Head of the National Iraqi Alliance, Sayyid Ammar al-Hakim, indicated that the results of elections in most of the region's countries are predetermined and known, only in Iraq, the results are not clear and the opportunities are open to all, this is evidence of reality and seriousness of elections, called for to vet candidates and elect the best based on the electoral program which enables building of a strong state ending country's issues.
‎
His eminence in a speech during a meeting with a group of elders and dignitaries of the tribes of Shammar "Sukuk" in the province of Diyala, praised the sacrifices made by the tribes and offered big numbers of martyrs in order to purge the country from Daesh terrorist groups, noted that the people of Diyala paid a large tax to achieve an Iraq where justice prevails and everyone have equal opportunity.

His eminence stressed the need to eliminate Daesh cells and extremist ideology and to have a non-tolerance approach with terrorists and take the utmost caution to prevent the return of Daesh and maintain the great victory, stressed the importance of caring for martyrs' families and solve their issues, appreciate their sacrifices and honor and commemorate the martyrs.

His eminence stressed the need to stay away from sectarian sensitivity, indicated that stability in Iraq will not be achieved with the continuation sensitivities, noted that clans and tribes have a major role in achieving stability, emphasized making unity of Iraq a destiny for all and at all stages. Unity of Iraq is achieved by building a strong state that protects everyone, and provision of services, and this needs a vision, plan and an efficient team. The presence of a strong state where citizen is protected on all aspects is the real solution to the Iraqi reality and the end of patch solutions.