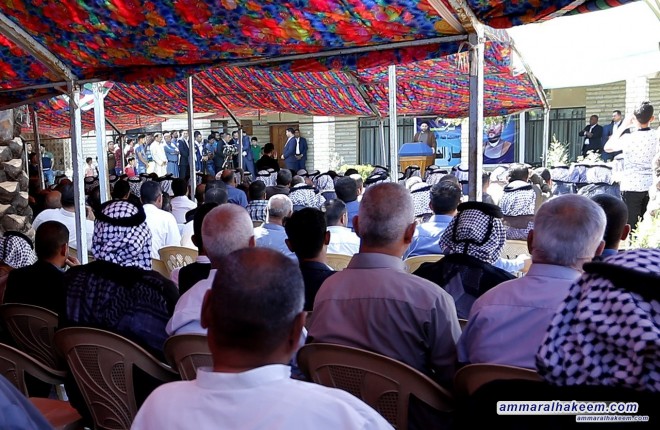 Head of the National Iraqi Alliance, Sayyid Ammar al-Hakim, met with elders and dignitaries of the Bani Tamtam and Bani Ka'ab tribes in Diyala province Thursday 22/3/2018
‎His eminence warned some people attempting to provoke sedition aiming to achieve personal benefit, indicated that there are people taking advantage of extremism and strife, called to pay attention and not disregard the security breaches that have occurred .
His eminence held everyone responsible for maintaining the achieved military victory, restored social harmony among Iraqi people and the relationship between Sunnis and Shiites, warning of laxity while terrorism is remain present as an ideology and sleeper cells.
His eminence called to oppose anyone sectarian discourse regardless of their affiliation, called on tribal leaders to assume their responsibilities in this regard, pointed out that Iraq is approaching the stage of stability and observed by the world as the rising country.
Sayyid Ammar al-Hakim stipulated having the will, learning from mistakes and professional review of plans in order to achieve stability and state-building, that this will not be done unless the voter elects men of the state, and that the voter should not be effected by influences, considering that the issue is related to the future of Iraq, stressed the need for Iraq parties working inside the state not the opposite.