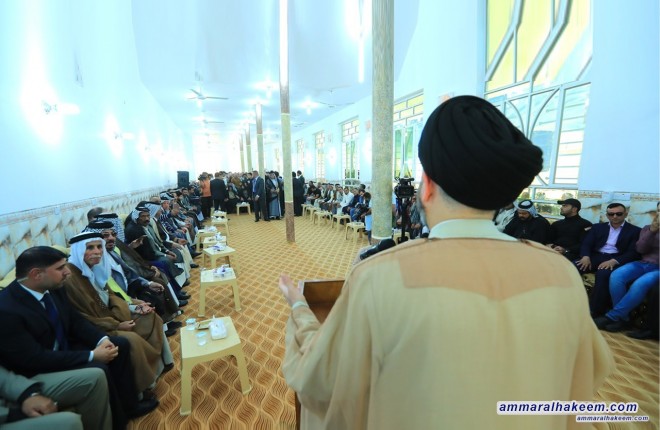 Head of the National Iraqi Alliance, Sayyid Ammar al-Hakim, met a group of elders and tribal figures of the Albu-Sultan tribe Baghdad Saturday 24/03/2018

His eminence stressed the need to continue of the war against Daesh and totally eliminate sleeper cells, pointed out that Iraq is in the final step of the stability phase, and reached setting building a strong state that fights corruption and provides services as a priority, stressed that elections in Iraq are real, and the people has the power to make a decision, however good selection of candidates is what will end the suffering of people.

His eminence indicated that victory over the occupation of Daesh was due to sacrifices made by tribesmen and their response of the fatwa of the religious authority, adding "but we did not win over Daesh affiliates, and we should not rest nor settle until we finish the last Daesh element in their sleeper cells.

His eminence pointed out that thanks to the three military, social and political victories, the country has reached the point of apprehending the stability phase, stressed the need for a strong state that provides services, jobs and housing, and fights corruption, not with mere slogans and dreams, but by an integrated plan, plus promoting coexistence and building strong institutions, ending bureaucracy, and building the best relations with the countries of the region and the world.

His eminence pointed to the necessity for political officials whom provide solutions to address the crisis of housing, electricity, services, agriculture and other issues, with a vision and plan to start, and " this makes us need competent people that have the ability to implement the plan and vision", reiterated urging for vetting and checking the names of lists and candidates of runners, and give votes for the ones able to build a state and serve people's interests.