Sayyid Ammar al-Hakim: In the coming government we will require clear deadlines for construction and reconstruction 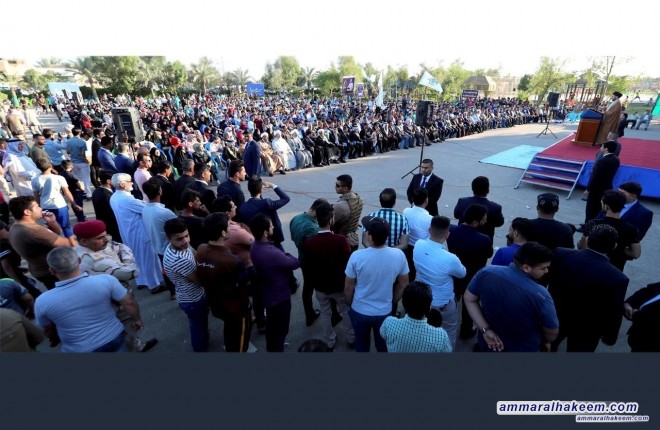 Head of the Al-Hikma National Movement, Sayyid Ammar al-Hakim, at a celebration of the birth of Imam Ali (peace be upon him) in Al-Shu’la area, Baghdad Friday 30/3/2018 promised to stipulate clear dates for construction and reconstruction in the next administration, indicated that the next phase must be subject to timing and not wasting time and opportunities, and make (service) a priority for the administration.
His eminence called for the importance of invoking the correlation between responsibility and accountability, accountability is not identical to responsibility, indicated that 2018 is the year of youth, called youth to take responsibility and mobilize effort to rid Iraq of its current crises, warned of political dichotomy and accusing everyone of corruption, because it will prevent the honest ones from addressing to preserve their status.
His eminence pointed out that the political dichotomy is not an approach Ali (peace be upon him), rejected politicization of religion, and demanded the religiosity of politics according to principles and ethics, pointed out the need to abandon the corrupt ones and expose them, “here lies the difference between who supported the corrupted because for being associated to him and those who acquitted the corrupt and extradited them to authorities”, indicated that “mistakes happen, but repeating it should not happen”.