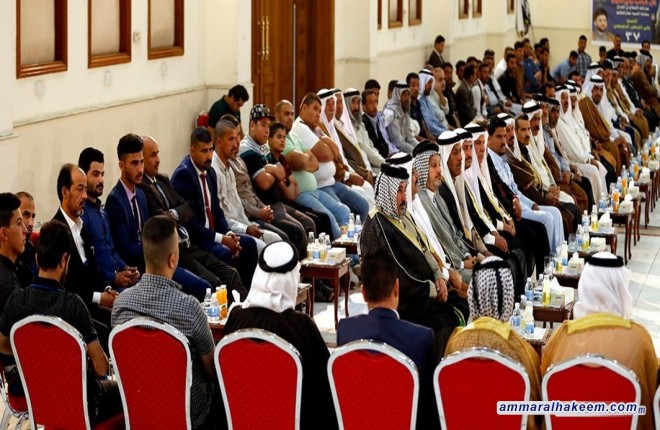 Head of the National Iraqi Alliance, Sayyid Ammar al-Hakim, at his office in Baghdad met a big group of tribal elders and figures of Baghdad belt tribes Saturday 7/4/2018

His eminence warned of dangerous plots in the Baghdad belt areas aiming to provoke frustration and prevent citizens' participation in the upcoming parliamentary elections, urged to avoid those who try to reach position of power through corrupt means.

His eminence praised the role of tribes of the Baghdad belt in the face of terrorism, bear the great blight and stand against sectarianism, stressed the need to continue efforts to eliminate sleeper cells and extremist ideology and the importance of maintaining peaceful coexistence. His eminence emphasized that sectarianism in Iraq is not societal, but a political, indicated that the Iraqi tribes are a mixture of different sects, therefore it is not possible to have society sectarianism in the country.

‎His eminence pointed out that patriotism is not a slogan, but a culture, behavior, feeling and practice. Patriotism is attained when the decision is national and seeks the interests of Iraq and does not priorize the interests of others over the interests of the country. His eminence stressed "patriotism and moderation are our unwavering basic principles"
‎
His eminence added that youth and caring for youth is a fundamental principle, noted that paying attention to young people does not mean not caring for the elderly. However, attention to youth will ease the burden of all segments of society, pointed to the necessity of building a society and a strong economy that provides job opportunities and give attention to women, empower them and invest energies of women .

His eminence stressed that state-building needs a plan, a team, policies and a clear study, stressed that Iraq's relations with its environment must be with everyone and turn the state of conflict among countries to a state of competition in order to create investment opportunities to build the country.

His eminence called to avoid contractors of politics and those who try to reach position of power by corrupt means, because they will not serve the country, and the flag should not be handed over to them, his eminence from provoking frustration among people and prevent people from participating in the elections, especially in the belt of Baghdad.