Sayyid Ammar al-Hakim: We have approached political entities regarding the form of the next government and we will win the wager on coalition before the wager on results 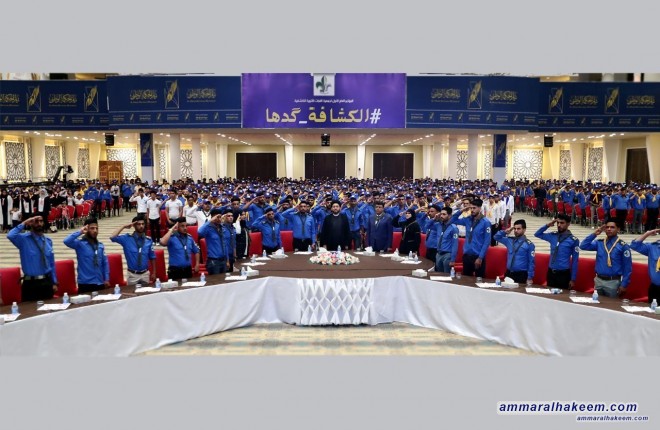 Head of the National Iraqi Alliance, Sayyid Ammar al-Hakim, at his office in Baghdad during the General Conference of Scouts Saturday 7/4/2018, indicated that the Al-Hikma National Movement approached with blocks and political entities and will win the wager on coalition before winning the wager on results that will be a big and surprising, and that the Al-Hikma National Movement invests its political influence, which is more effective than numbers. His eminence addressed scouts "You are the focus of the next political practice," providing that upcoming prime minister have a clear vision and time schedule for provision of services and employment opportunities for youth, called on the High Electoral Commission for Elections Electoral to be more robust in the face of violations and breaches, "there are who are making a living out of crises and there are who are making a living out of toppling others"

His eminence ‎described the elections as a measure to prove the legitimacy of the state and institutions, and to toppling others is a childish approach " that we know and know who stands behind it, but we are preoccupied with our project and with achieving our vision to build the state."
His eminence explained that the Al-Hikma National Movement will bring the surprise in May, and then will work to break all barriers that stand against the representation and empowerment of youth, noted that the first step is to have one age range that qualify for establishing a party and for running to the House of Representatives, and pointed out that all options are open and no red lines to anyone, but those who have a problem with the people or failed to provide service to the Iraqi citizen, diagnosed the problem as management issues and lack of prioritization, warned of those who live on crises, political dichotomy, false allegations and lies, indicated that who calls for political dichotomy will not be trusted by the people.
His eminence pointed out that the Al-Hikma National Movement is working to build a strong and prestigious state, and the Al-Hikma National Movement espoused the most difficult way; building, upbringing, institutional work and starting from society, unlike some who rely on power and practice roles of authority on people to make a change. His eminence addressed scouts by saying "With you we will support our project, and you are the capital of a fair and modern state, and our pride, because you are the future of Iraq and you are up to it", explained that scouting is a voluntary service and a scout should be less demanding and more giving.