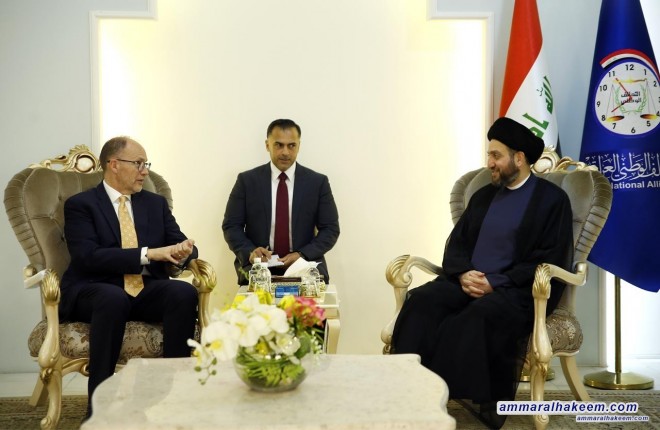 Head of the National Iraqi Alliance, Sayyid Ammar al-Hakim, at his office in Baghdad received US Ambassador Douglas Silliman Tuesday 10/4/2018.
His eminence stressed the importance of the national majority composed from political powers with common electoral programs, pointed out that this will create a government that bears responsibility and opposition that monitors and hold accountability, in addition to the importance of anchoring the democratic experience.
His eminence explained that the next phase requires focusing on the challenge of building the state and institutions, stressed on economic priority and job creation that should be the focus of future government, stipulated attracting foreign and national investments as a key factor in achieving these priorities by providing adequate facilitations that are active abroad of Iraq, called changing the form of interaction with investors in order to encourage them to contribute reconstruction and cushion unemployment.
His eminence pointed out the regional situation and escalation, noted that escalation does not serve the peoples of the region and does not address their problems, Iraq is moving towards stability and state-building and will be effected by the regional escalation.