Sayyid Ammar al-Hakim: Al-Hikma National Movement will be the center of the upcoming largest bloc with surprising number of seats and acceptance by all 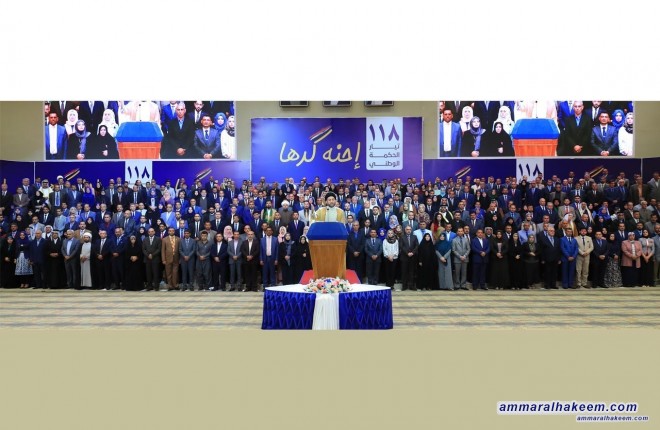 Head of the Al-Hikma National Movement, Sayyid Ammar al-Hakim, during the announcement of the Al-Hikma National Movement’s electoral list at his office in Baghdad 14/4/2018 expressed deep confidence in the upcoming Al-Hikma bloc and its future in forming the largest bloc, explained that by number of seats that will surprise everyone and being accepted by the rest of the blocks and political entities, added that the Al-Hikma will work to build alliances and form acceptable national majority, his eminence called on the Electoral Commission to shoulder its historic responsibilities in protecting votes of citizens and safeguarding the electoral process through electronic counting ballot and polling, casted voter's responsibility to make a good selection to change the reality he lives in.
His eminence pointed out that the next phase will include specific stipulations for the next elected prime minister, including commitment to a clear service program within a specified deadline, stressed that the next phase will be subject to an annual assessment of prime minister performance “since there is no four years open check”, described the next phase as trust strengthening between the political system and the people through government of service away from slogans, intimidation and conspiracies, while “political alignments and protecting the political process is a phase that ended”.
Sayyid Ammar al-Hakim called on the next prime minister to clarify how to improve services, provide employment opportunities, improve economy and support agriculture, industry and investment and support the private sector and improve health and education, noted that these issues require a successful man who does not handle crises through creating crises, promised to criminalize every discourse calling for hatred and overawe people from each other.
His eminence called for giving priority to the national spirit as a basic condition for building a capable state with a slogan (Iraq first) and dominating all regional or international allegiances, pointed out that the future government must be a government of service, not a government of crisis, a government of action not a government of words, a government of national majority not a government of quotas, a government which the people are the necessity and not the leader for the necessity, a government of Integrity not a government of corruption, a government of accountability not a government of favoritism, a government programs not a government of characters, a government of one axis not axis oriented, a government of unity not a government of disintegration, a government that places a strategies for crossing over and bolster the unity of Iraq, rebuild liberated cities and cities of liberators and works on resettlement of displaced families.
His eminence called on the future Al-Hikma bloc to provide financial disclosure and support laws that are in the interest of the country, and commitment to attend and openness to political blocs, and continuous communication with people without changing addresses or phone numbers, referring to features of the Al-Hikma list, including national diversity by 25% Sunni component and 10% Kurds and Turkmens, 90% new faces, 45% under 40 years of age and 96% graduates with university degree and academic, administrative and integrity experience, and these numbers are strong messages to serve the project and defend the homeland.

His eminence called on the people to participate in the elections and invest the opportunity to make changes, stressed the need to elect eligible candidate in reliable electoral list, highlighted that the Al-Hikma National Movement arrived basing on extents of the phase and people's aspirations, and the movement is characterized by moderation, youth and methodical program and women empowerment and patriotism in making the Iraqi independent political decision and unbiased to a specific sect and ethnicity, and nationality of program and plans. His eminence addressed Kurdish people "you are part of Iraq and we will stand up and defend your rights," and addressed the masses of Salah al-Din, Anbar, Ninawa, Diyala and Kirkuk, to indicate the need for reconstruction of cities and resettlement of displaced people, and pronounced sons of Baghdad, Middle Euphrates and the south.
Head of Al-Hikma National Movement, described the electoral program realistic and technical that focuses on service prioritizing without slogans or compositions, stressed on administrative revolution and provision of employment, pointed out that the advancement of youth means advancing the status of the Iraqi society.
Regarding regional aspects, his eminence strongly condemned rocket attacks on Syria by the United States, Britain and France as a violation to the sovereignty of an independent country, reiterated his call for a regional dialogue to end crises “there is no solution to conflicts except through a constructive dialogue to consolidate regional security.” and rejected the negative policy of disassociation, considering Iraq’s position and history “ Iraq must be with a policy of positive interaction and openness to the region and the world and take into account the sovereignty and independence of Iraq”.