Sayyid Ammar al-Hakim: We will continue reform projects despite the confusion and will give an image of the professional political work 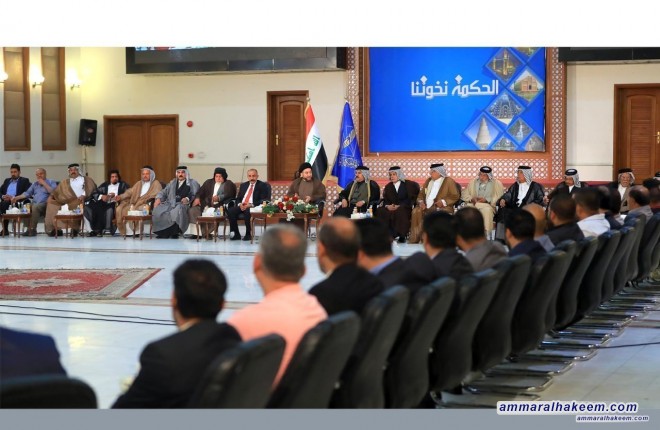 Head of the National Iraqi Alliance, Sayyid Ammar al-Hakim, in his office in Baghdad met a group of tribal elders and figures of the Itab tribe 16/4/2018
His eminence reiterated his call to make the right choice in the upcoming parliamentary elections, stressed that reform projects will continue, despite issues and confusion, through building a prestigious state that serves the citizens and end their suffering.

His eminence stressed that the country is going through a historic moment that requires considering the past and looking forward to the future by looking at the security, social and political victories and preserving them and the need to start a new phase in building a strong state capable of providing services, develope economy and provide employment opportunities, pointed out that the advancement of the country is not miraculous and " we possess the ability to do so through solid plans, vision and a competent team able to find solutions to the problems and crises despite financial constraints and other issues."

His eminence pointed out that the fight against corruption must be through mechanisms and plans to prevent the corrupt from accessing and misusing public money, stressed the importance of making interest of Iraq as a first priority and pay attention to the Iraqi family, in order to make Iraq's speech respected among the countries of the region and the world.

His eminence reiterated his quest to give an image of the professional political work away from the unexperienced and risky political action, pointed out that "an ever-shifting politician is not trustworthy", called on the Iraqi people for making the right choice on 12th of May to end the suffering and crises, the decision lies in the hands of the people, stressed the ability elevated the people to a a deserved level through carrying on real reform projects despite the obstacles.