Sayyid Ammar al-Hakim: We will not allow targeting of the Feyli Kurds again and we will follow up with security on the security situation in Khanaqin 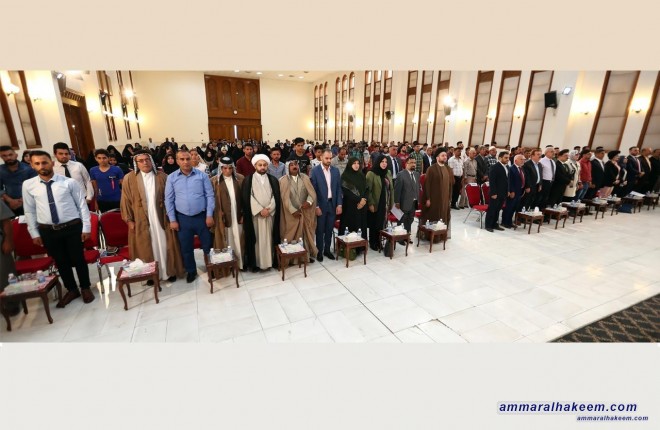 Head of the National Iraqi Alliance, Sayyid Ammar al-Hakim, at the General Conference of the Iraqi Alliance for the Feyli Kurds held in his office in Baghdad Saturday 21/4/2018 stressed to address any attempt aiming to target Feyli Kurds again, stated, "We will not allow targeting the Feyli Kurds again and will follow up with the security leaders on security situation in Khanaqin”, called to establish a national center specialized for documenting the crimes committed against the Feyli Kurds in Iraq including mass executions, forced deportation, targeting based on identity, withdrawal of nationality and the making some of them to laboratory chemical and biological experiments.
His eminence called for wide participation in elections and invest the opportunity for making changes, stressed that advocating justice to oppressions faced by Feyli Kurds and the Iraqi people will be trough participating in elections and making the right choice to elect a reliable electoral list and honest, efficient and experienced candidate, pointed out that change needs a national majority government with weight of Iraqi people components that carries the flag, and faced by a strong opposition that objects and rectify within the Council of Representatives, basing on a clear program of state administration and an agreed criteria for selecting the Prime Minister and the next challenge, in accordance with the program agreed by the blocs affiliated with the government of the national majority, noted the importance of looking for the individual who meets the terms and guarantees appropriate deadlines for implementation of programs, reiterated confidence that Al-Hikma list will make a surprise in the next election in terms of representation and the number of seats.
His eminence called for participation in elections for sake of Iraq and taking rights, noted that the participation will send positive messages about the Iraqi awareness, addressed the conferees by saying: "O Feyli Kurds, Iraqis, youth, take your chance to change the reality." called on the Feyli Kurds to unite hoping to have an elected member of parliament for this component from Wasit, Diyala and Baghdad, considered that the Feyli Kurds alliance has taken a step in the right direction.
Regarding the Feyli Kurds, his eminence stated that it is a broken, marginalized component and targeted because of its identity, and faced ablation and displacement form its roots, and this what was stated by president of the former regime when bragged the success of revolution to eradicate Feyli Kurds component on 16/2/1981, his eminence called do this component justice, for it has contributions to Iraqi history, described that what they have been through an honorable mention for them in the fight against the tyrant, however they were not rewarded in a manner commensurate with the size of their sacrifices, 600000 people were displaced and 20,000 others were forgotten prisons of Radwaniyah, Nugrat al-Salman and Abu Ghraib and the Fifth Division and faced confiscation money and real estates and coerced divorce of women.