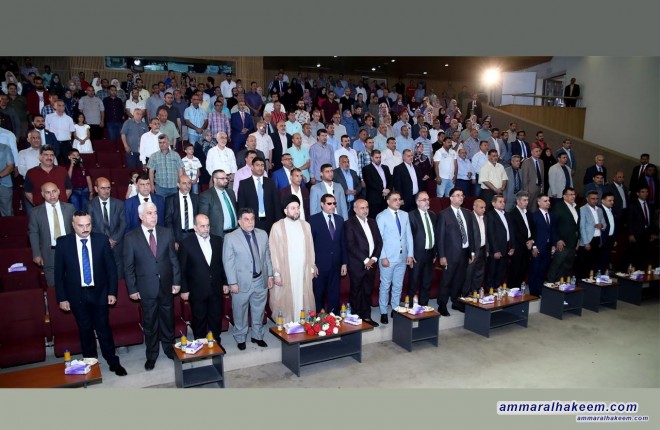 Head of the National Iraqi Alliance, Sayyid Ammar al-Hakim, at the annual anniversary of Iraqi political prisoners Baghdad Sunday 22/4/2018 called on political prisoners to raise the slogan of reform and contribute to maintaining the political system, stressed the need for broad participation in the elections considering boycotting elections a panelty to citizens and not a statement of reproach against a political side.

His eminence recalled trials and suffering of political prisoners who were subjected to the most severe cases of persecution in dreaded cells, without the possibility of having a fair trial. They did not have the opportunity to defend themselves, describing them sincere loyals, called to provide a financial budget commensurate with the size of the institution of political prisoners and give priority those who deserve it, everyone should take responsibility for this matter.

His eminence considered the political prisoners the most capable to defend freedom of the people because of their justness of the cause, stressed not to shorten this issue in a political project, pointed that country needs political prisoners to lead a parentalistic role contributing to the desired change and demand to correct issues and raise the slogan of reform to make Iraq as they wished and made sacrifices for.

His eminence urged to be believers in supporting the project and in the fight against all false and wrongful behavior, and revolutionary in correcting the paths and changing things towards the best, stressed that political prisoners are victims of sectarian and national discrimination, and today their slogan must be not to distinguish between people and that all Iraqis cooperate in a unified action.

On electoral matter .. His eminence indicated that boycotting elections will not punish a specific political side, but a reward, because the politicized public will participate and the citizen will punish himself and not the political parties that citizens reproach, stressed the importance of defending the political system by participating in elections and disseminating participation culture and decision-making in accordance with a solid electoral program which adopt implementation mechanisms and not only projects of wishes and intentions even if they were sincere, pointed to the need to vote for qualified candidates capable of building a state that provides services, and that each phase has its own requirements, and today is the phase of service, which requires a service provider that provide the basic matters of the people.