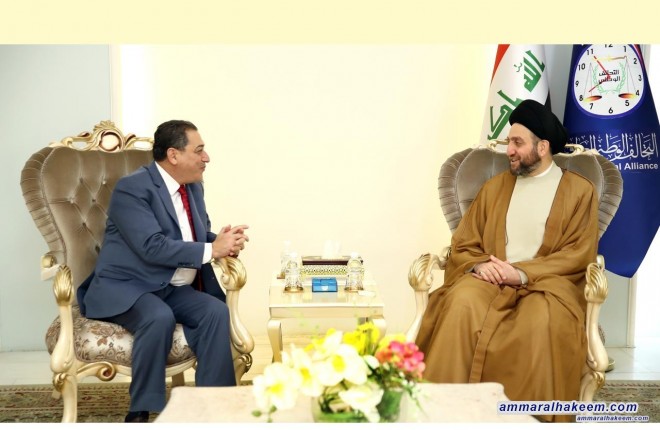 Head of the National Iraqi Alliance, Sayyid Ammar al-Hakim, in his office in Baghdad received Mr. Nidal Mansour, Chief Executive Officer CEO of the Centre for Defending Freedom of Journalists of Jordan Monday 23/4/2018
His Eminence with Mansour discussed reality of press and media in the region especially the Arab region and Iraq, pointed out the importance for media taking its role in monitoring and following up executive performance in a professional manner that contributes to the delivery of information to people and sheds light on pros and cons in order to assess and evaluate, stressed that media should be away from politic conflicts and not to be a party of it.
His eminence pointed to the Iraqi reality and development of media through satellite channels and newspapers that monitor, criticize, object and query about everything, and that the freedom of the press in Iraq exceeds the freedom of the press in many countries and this is a credit for the Iraqi democracy experience.
Regarding the upcoming elections, his eminence called for of Arab and international media presence to capture the nature of Iraqi electoral practice and reflect the positive image of Iraq, which was subject to confusion and dramatizing and many convictions are based on the confusion. His eminence praised the bilateral relations between Iraq and the Hashemite Kingdom of Jordan.