Sayyid Ammar al-Hakim: We are seeking to form the Moderates’ Alliance, which will emerges a government that includes the moderation powers 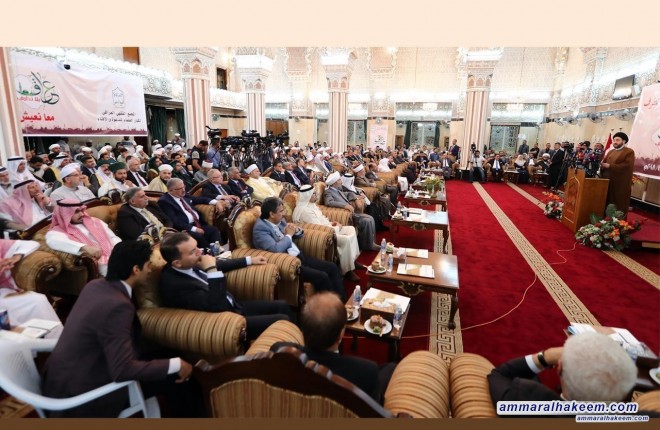 Head of the National Iraqi Alliance, Sayyid Ammar al-Hakim, in a speech during seminar of launching the Iraq without extremism campaign of the Iraqi jurisprudence gathering held in Baghdad Saturday, 2/4/2018, announced his intention to form the Moderates’ Alliance to form the next government, the alliance is characterized by moderation, harmony, patriotism, methodology and power in Iraqi decision-making, stressed that achieving coexistence among the children of Iraq is the first priority and Iraq should be an example in harmony, tolerance and integration, protecting personal and social freedom.
His eminence expressed his thanks and appreciation to the jurisprudent gathering for their initiative, stressed that it came at the right time, especially after Iraq emerged from a relentless military war and declaring Iraq cleared from Daesh occupation, stressed the importance of standing against extremism and working to eliminate and address it.
His eminence added that Iraq is characterized by its diversity of sects, religions, ethnicity, tribes, territories and politics. It is truly a bouquet of multicolored roses and smart smells. The strength of Iraq is in the strength of its combined components and there is no strength of country with only few of its components on the expenses of others. And added that Iraq had crossed hard phases and achieved big triumphs, but not out of danger, stressed the need to address areas of internal dispute in a comprehensive manner, away from political oppression by status quo that does not last for anyone, and the region is still inflamed and live exceptional circumstances and it is normal that Iraq is affected by its regional surroundings, but it is not normal to become part in these crises and take sides to a particular axis.

His eminence stressed the importance of enhancing independence, stability and strength and that Iraq is above all considerations, pointed out the importance of achieving coexistence among the people put in the forefront of priorities, and this can only be achieved by consolidating moderation and fairness and meeting in the middle when differences occur in which shows qualities of courageous people and not considered a weakness nor condescending.
His eminence stressed that imported solutions from outside borders do not lead to more problems and intersections between the sons of one country, indicated that the basis in finding a solution is equality of opportunities, renounce discrimination and abide by the principle of citizens’ constitutional rights and duties, pointed out that Iraq should be an example in harmony, tolerance and integration, and in protecting personal and social freedom of religions and sects followers without discrimination, and preserve the demographic diversity of all components, stressed that this requires effort from religious, social and governmental institutions.
His eminence to the failure during the past phases in the economic aspects, and in solving problems in agriculture, industry and economic development, and facing redundancies of government institutions, combating financial and administrative corruption in a scientific and systematic manner. His eminence announced his intention to form Moderators’ Alliance and that this alliance is the next government with its five features, moderate and fair, powers of moderation and consistent with the service of the people, not engaged in conflicts and intersections, be systematic and work in an institutional manner and a clear program for that government, and be strong and a decision-maker and a performance monitor, be a patriotic n name and label and in slogan and behavior, indicated that the broadened participation in the elections and making the right selection will ensure that the country will achieve these goals.