Sayyid Ammar al-Hakim: We will not allow any regional or international side to interfere in forming the government and we do not need the trusteeship of anyone 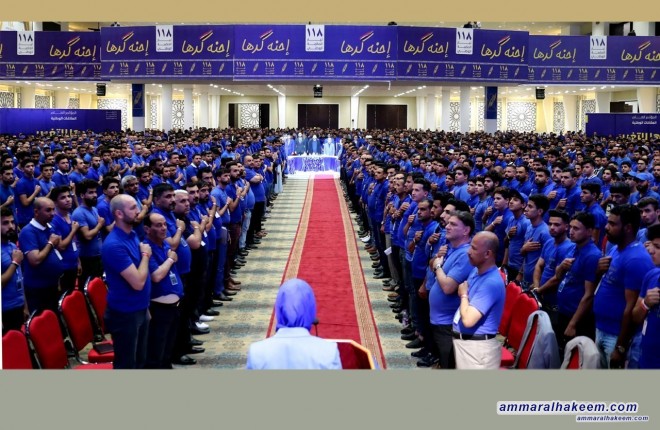 Sayyid Ammar al-Hakim, during the General Conference of the National Relations Bureau held at his office Baghdad Saturday 28/4/2018 stressed the importance of Iraqi decision to form the future government, rejected intervention of any regional or international side in forming the government, because Iraq is country with sovereignty, addressed those who visit embassies seeking roles in the next phase by saying "Do not rely on anyone and trust your people and your public, the people's choices are decisive", his eminence expressed his rejection of formulating any failed equation in the next phase, reiterated terms raised by the Al-Hikma Movement to the Prime Minister to provide a program of service according to a time-specific ceiling, described the next phase a phase of construction and reconstruction and the services provision, indicated that it is the end of the time for line-ups and the start for planning and action.
His eminence considered the Al-Hikma Movement the cornerstone and the center of balance in the future government, underlined priorities of the future government by; building political, economic, security, cultural and social aspects in accordance with a comprehensive plan, pointed to the need for a national majority government facing challenges in an initiative and decisive spirit, called to make the 12th of May a day of victory through electing the best candidates and combating corruption, and emphasized on electing the competent personages who have a project and achievements.
His eminence addressed members of the National Relations Bureau indicated the need to trust in God, in self, and the institutional work and the movement's construction, and to keep training, development and renovation - but not the standards - plus movement, political, social and governmental empowerment, as well as motivating and empowerment of women and expand to the entire geographical area of the homeland and to espouse service provision as an approach to work internally and provide service to the people and emphasized on openness to everyone and to be present on field, pointed out that Iraq in 2018 differs from Iraq in 2003 and "we have to prioritize", stressed Iraq's need to men of the state and not the men of parties and blocs.
His eminence indicated that the Al-Hikma Movement adopted competition on the basis of programs and did not rely on discrediting of others as some practices, noted that the Al-Hikma Movement adopted communicating with others and not raising more concerns, and promised the public of more positive surprises in the coming days.