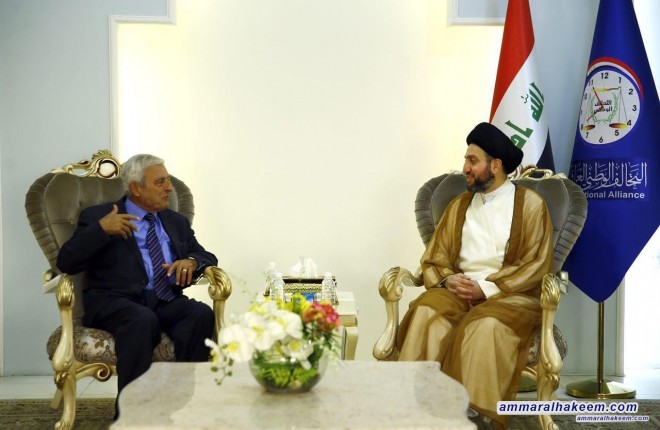 Head of the National Iraqi Alliance, Sayyid Ammar al-Hakim in his office in Baghdad, met with the head of the Evangelical Christian Union Churches in the Middle East, Pastor Sami Ibrahim Dagher and accompanying delegation Wednesday 2/5/2018

His eminence with Dagher discussed rapprochement between religions and the need to focus on the commonalities, stressed that commonalities among religious institutions of all religions are many, pointed out that the pillars and standards of these religions are one, and that the Islamic-Christian dialogue does not mean persuading of a side to the other, but is a search for commonalities and coordination of positions as it converge ideas and clearly shows values ​.
His eminence indicated that the Islamic message came to prove previous messages, stressed that the numbers of prophets and messengers is a necessity for human integration and keeping pace with generations.
Head of the Evangelical Christian Union Churches in the Middle East, emphasized making great efforts in humanitarian work in Iraq, Syria and Lebanon, expressed confidence that the region will overcome its crises.