Sayyid Ammar al-Hakim: The upcoming elections are a turning point to stability and construction 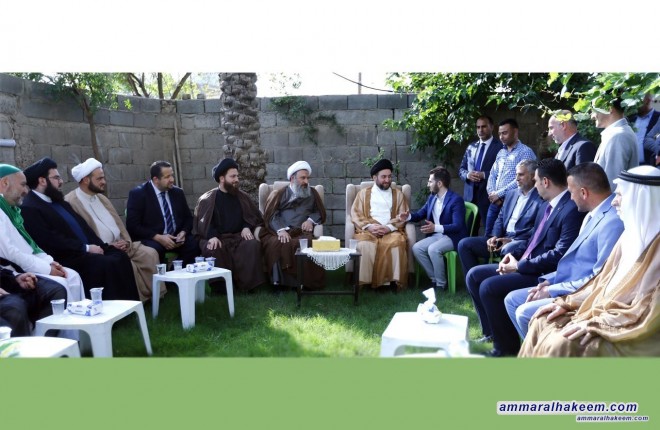 Head of the National Iraqi Alliance, Sayyid Ammar al-Hakim, in a speech during meeting a group of Al-Sadah Al-A’rajiyah tribe Friday 4/5/2018, reiterated importance of upcoming elections considering elections a decisive turning point in transition to stability and state-building.
His eminence indicated that the religious authority fatwa and answered by the Iraqi youth was able to change the battle balance against Daesh and retake the soil from those beastly men, and added that “Iraq is at a historic moment after announcing being cleared from Daesh occupation and being able to preserve the unity of its territories and decrease sectarianism”.
His eminence pointed out that the upcoming elections are a turning point as it shifts the country from building democracy and instability to nation-building, stability and focusing on reconstruction, combating corruption, building the state’s institutions and revitalizing economy and openness to the world.
His eminence stressed that Iraq has a lot of basis to advancement; strengths in human resources that have high intelligence and desire to build, learn and develop capacities, in addition to the important strategic location, noted that the regional situation and developments encouraged countries to compete in the establishing new relations with Iraq, and this was the result of the great victories achieved in the war against Daesh.
His eminence noted that there is great political maturity in the opened to media Iraqi settings, expressed hope that Iraq will proceed quickly in the next phase.