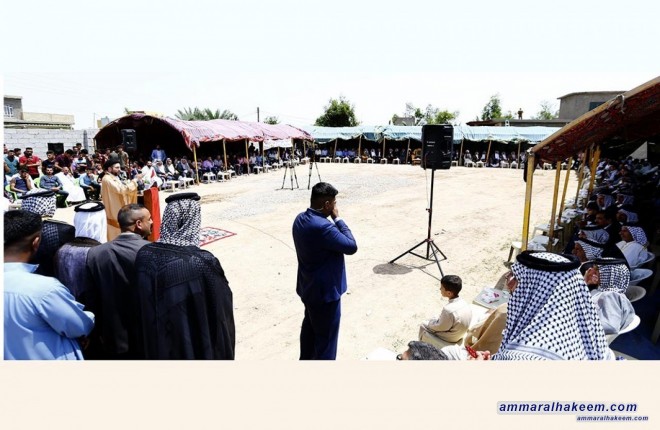 Head of the National Iraqi Alliance, Sayyid Ammar al-Hakim, met a group of youth elites and agencies Saturday 5/5/2018 warned from tampering electronic ballot devices that are to be used in parliamentary elections on May 12, called for electing national figures who are known of integrity and efficiency and abide by directives of the Supreme Religious Authority regarding the elections.
His eminence expressed his pride and towards the criteria set by the supreme religious authority, including depending on electoral programs that have solid scientific program for the electoral lists and depending on a successful head of political bloc. His eminence emphasized that the Al-Hikma National Movement espoused communicating with people and presented his electoral project without exploiting sacred titles in the election campaigns, expressed his pride in presenting a national project not linked to any foreign agenda.
His eminence urged the need to elect the candidate and the list based on the electoral program with a firm conviction to elect the candidate before the day of the elections to ensure efficient personages reaching the government, and not empowering the corrupt and those who failed.
His eminence pointed out that boycotting elections will make the corrupt win through the participation of their supporters, stressed that participation in elections is a right and moral obligation, and added that the Al-Hikma Movement list is new with faces and youth energies and new plans, warned of attempts to disrupt the electronic ballot systems for forging and manipulating results, his eminence stressed that the election boxes are the responsibility of election officials and observers.
His eminence stressed that maintaining and protecting the votes of voters is a big task that must be accomplished, added that the Al-Hikma Movement has achieved a surprise at this moment and there are many surprises to come.