Sayyid Ammar al-Hakim: We warn against electing external agendas advocates, we will not allow political consociationalism continue at the expense of real services and employment opportunities for youth 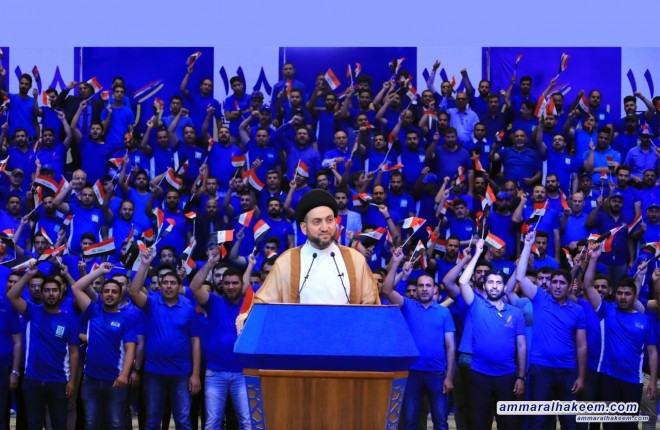 Head of the National Iraqi Alliance, in a mass gathering in Baghdad Tuesday 8/5/2018 highlighted several points stating important to bring a radical change in the coming phase, promised to move forward in tackling problems and mistakes at all costs, indicated that crises were a result of the current political system based on consociationalism and will not produce service provision nor active economic reform, and leads to deception that is utilized by some officials still making promises and assuming positions for 4 years, rejected foreign agendas that want to turn Iraq into a puppet at the expense of its sovereignty and national decision and warned from electing them. His eminence stressed empowerment and provision of employment opportunities for youth and the future government should be a government of employment opportunities and jobs.
His eminence stated "The political system based on consociationalism did not produce a process of real service and active economic reform in the country and youth could not take their real opportunities within the state and society and this requires radical changes to our electoral reality and our political system", stressed on ending proxy employment and undo the state within a state that had harmed the country, placing the right person in the right position, decrease privileges of officials that are on the expense of the people and added “Nothing compares to the loss of youth and their ambition for the future."
Sayyid Ammar al-Hakim described a person in charge who speaks in letters of (shall and will), while sitting on the chair of responsibility for four years without adequate achievement and no real review deceptive official and unreliable, promised to take measure of change of this situation "We have been full of justifications and arguments," pointed out that practical experiments proved in this session that the real problem is not a problem of resources, but rather a problem of managing these resources in the right way, expressed his pride in introducing men by the Al-Hikma National Movement who were able to make great achievements despite the scarcity of available resources “ We have nothing but work, field, and test the untested and the successful tested, enable him to serve the youth and the people "
Regarding the Iraqi decision-making, his eminence promised to address any external agenda trying to turn Iraq into a puppet, stressed that "Iraq is for its people and its youth. We will not allow infringing sovereignty of Iraq and its independent political decision, even if it costs us our lives. Our lives are cheap compared to Iraq's dignity and sovereignty”, described the political equation that is not producing employments for youth or meeting people’s aspirations towards having a decent life and do not safeguard Iraq's sovereignty and national security a failed equation that is not worthy of renewal, notثي that the Al-Hikma National Movement will not be part to any failed political equation and will not allow the continuation of political consociationalism at the expense of services and real employment opportunities for youth.

المترجم الجديد, [٠٨.٠٥.١٨ ١٥:٤١]
His eminence emphasized that the future government should be a government of employment opportunities and jobs, a government of factories and infrastructure, a government of agricultural development and addresses problems of farmers, a government of education, health and services, a government of construction and reconstruction, a government of economic recovery, investment and supports the private sector, a government that supports and protects national product, refused forming a government of scenes and deals, while expressed his support for the government that clearly and explicitly announce how to deal with the unemployment of youth in the country of oil and wealth, making failed policies accountable for the economic deficit and turning Iraq into a consumer country not a producer country, expressed regret for the economic reality of Iraq by stating “a country distributes the budget as salaries of staff to buy goods from neighboring countries, Iraq is not able to restore prestige among countries while still not eating from its own sowing, the others must have the courage to acknowledge it and have the audacity to review’, stressed that the AL-Hikma National Movement adopts the time-bound service program which is clear in implementation as criterion for selecting the future prime minister for the next government without any compromise on it.
His emetine indicated that the current state of current discontent and resentment is attributed to complacency in holding the corrupt and defaulters and who caused waste of money, opportunities and did not empower good and successful men in positions of power, and emphasized “And we will not again allow ignoring the successful, loyal and partitions from assuming service and responsibility positions. The next phase is the phase of men in the field and the achievers not those of slogans and bids.”
Head of the Al-Hikma National Movement addressed those who are undecided to participate in the elections and state “not participating means that you put yourself in the spectator's seat and the arena will be free for political parties and their constituents. " pointed out that Iraq is too prestigious to be shared by only political parties, “you make the change in the equation and make a difference, the past four years are enough to assess who was in power if successful or a failure”, calling on them to strongly and willingly participate in the elections to remove the failures and adhere to the successful, and give the opportunity for new and youth faces, explained that "it is the time of decisiveness, not the time of hesitation, the time of trust, not the time of dependency, the time of optimism, not the time of frustration," and urged them, "Make your decision and trust in your Lord and trust in yourselves and hope for your future, victory is made by optimistic confident people not by the frustrated and hesitated,” warned against electing those who are influenced by external agendas when making their political decision or begging money from abroad, exploit holy places, waste public money for elections, utilize hatred and incitement discourse towards the other of his own people, addressed youth by stating “O hope of Iraq and pride I say it today and I am confident and I know that through you we will change the reality of deals and political settlements and achieve the logic of the national majority by forming of the government of service, through you youth of Iraq we will break the rules of failure and fabricating logic of crises and arguments .. will surprised the failures and incompetent and foreign agendas advocates with the results you will achieve on 12 / May God willing " and added “Through you, youth of Iraq, we will win the battle of betting with those who bet on undervaluing your capacities and enthusiasm and you are the lions in the field, through you youth of Iraq, we will expose the falsehoods of failures and those who spread rumors and false reviews, and prove to them the true surprises that we promised from the first day launching the election campaign.