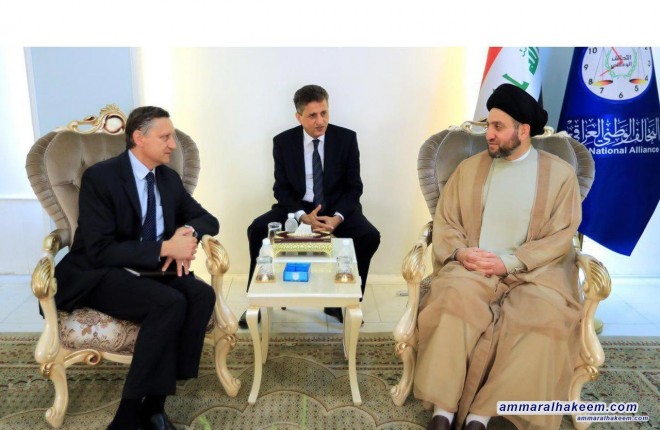 Head of the National Iraqi Alliance, Sayyid Ammar al-Hakim, in his office in Baghdad received the German ambassador to Baghdad Cyril Nan Wednesday 9/5/2018
His eminence with Nan discussed the bilateral relations between the two countries and means of upgrading relations, and recent developments in the region, noted that region’s people will suffer from escalation and reignite tension and disputes that hinder development, praised the EU position calling for balance and stability, and expressed Iraq's readiness to play a positive role in supporting efforts that achieve stability on regional and international levels through relations and national decision.
His eminence stressed that developments of situations should not negatively reflect on the process of state-building as it is a key pillar in forming of the future government and the priority of electing prime minister, expressed rejection to any impact produced by regional conflicts on realization of the Iraqi citizen aspirations in security and stability and to livelihood.