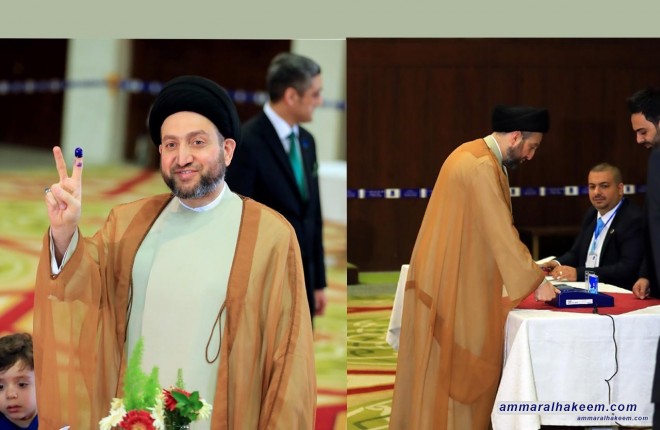 Head of the Al-Hikma National, Sayyid Ammar al-Hakim Movement casted his vote in the fourth legislative elections witnessed by Iraq since the start of Iraq's democratic experiment Saturday, 12/5/2018
His eminence considered commitment to the elections date a commitment of the political system to democracy, urged Iraqi youth to shoulder their responsibilities, to vote, participate in making the future and prevent the return of the corrupts.

His eminence pointed out that the electronic procedures of ballot should not take extended period of time, commended the Independent High Electoral Commission role and the security services in protecting polling stations, hoped that the process will not witness any disturbance to the electoral process and its transparency.
Sayyid Ammar al-Hakim called to recognize and accept the results without considering the unrealistic expectations issued by the blocs to themselves, indicated that the Al-Hikma National Movement will work on the Al-Mu'tadilin (moderates) Coalition in order to create a national majority capable of running the country, reiterated that the results of the Al-Hikma National Movement will surprise everyone.
His eminence stressed that announcing the results will mean turning dialogues into serious understandings, called on the Electoral Commission to scrutinize all information regarding oppression or violations especially in displaced population camps and others, stressed the need to preserve the transparency of the electoral process.