Sayyid Ammar al-Hakim: Doors of the Al-Hikma and Saairun are open to those who agree with their program to form a strong and capable government 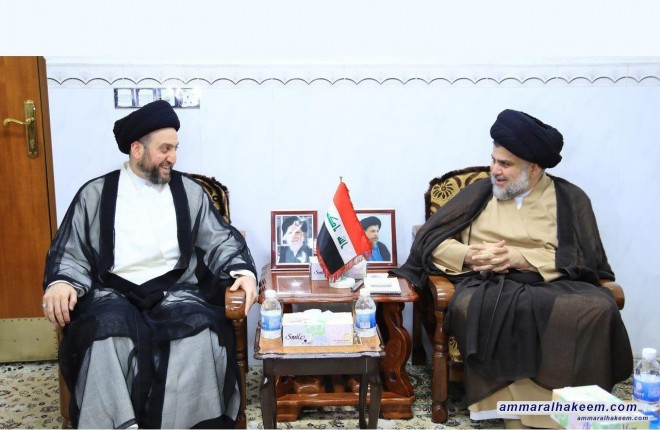 Head of the Al-Hikma National Movement after meeting the leader of the Sadrist movement in Najaf, stated that the doors of the two blocs, Al-Hikma and Saairun are open to the remaining political powers with consideration to the level of agreement with Al-Hikma and Saairun programs aimed to build a strong and capable country, with a national decision based on national interest, and stressed the need to build a state of institutions basing on clear programs and plans.
His eminence considered decline in voters participation a proof of people's desire to see new faces and provide plans and programs to provide people's needs, valued the role of of who contributed to the success of the recent electoral practice, led by the blessed religious authority, political powers, runners and the Independent High Electoral Commission which is called to consider the reported complaints.
Sadr emphasized that Iraq is approaching a new page, called for meeting demands of Iraqi people, praised the role of all those who contributed to the success of the Iraqi electoral experiment.